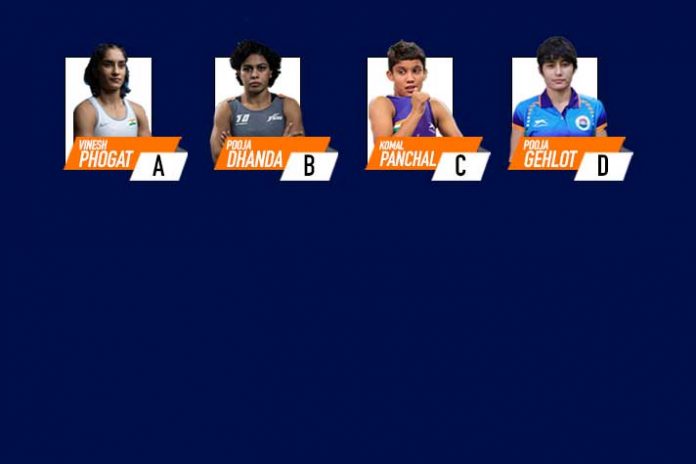 WreatlingTV, India’s only exclusive platform for the sport of wrestling is conducting a poll to celebrate the achievements of the Indian wrestlers. The WrestlingTV poll will allow the wrestling fans to vote for the best male and female wrestlers from India in year 2019. The fans can cast their votes for their favorite wrestling star by logging into www.WrestlingTV.in. WrestlingTV polling for the best male and female wrestlers will start on 18th Dec and fans can cast their votes till 26th Dec 2019. The winners will be announced on 27th Feb 2019.

Nominees for the Best Indian Female Wrestlers are –

1) Vinesh Phogat – Indian wrestling’s strongest girl Vinesh Phogat had a great 2019. In the current year, she became the only Indian women to qualify for Tokyo 2020 at the Senior World Championship. In the process Vinesh also won the world championships bronze medal, only medal by any Indian female wrestler in Nur-Sultan. Not only this, Vinesh also won gold medals in
UWW ranking series events Yasar Dogu and Grand Prix of Spain. Vinesh is currently ranked number 2 in the UWW rankings for 53kg behind Park Yong Mi of North Korea.

4) Pooja Gehlot – The wrestler from Lampur village, Delhi became talk of the wrestling circles as she entered the U23 World Championships in Budapest, Hungary. She lost the finals to Japanese great Haruna Okuno and ended up with silver medal for the country. Gehlot will now attempt to qualify for Tokyo 2020 by moving down to 50kg category.

Vote for these Super-Girls and tell us who according to you is the FEMALE WRESTLER OF THE YEAR. Log on www.wrestlingTV.in and cast your vote.