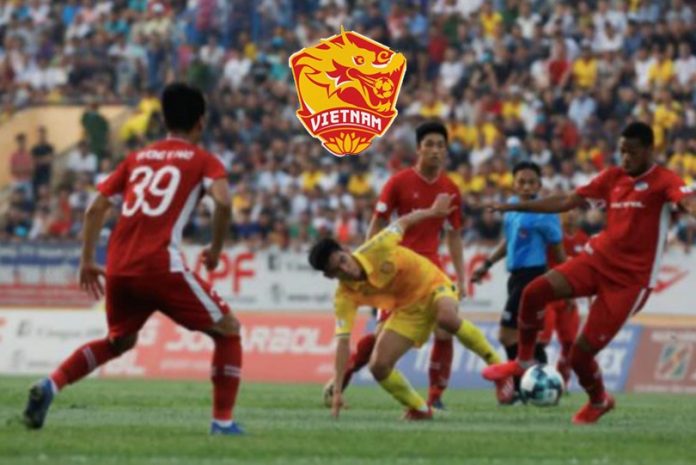 Thousands of fans poured into stadiums in Vietnam on Friday as the country resumed top-flight soccer without social distancing measures or curbs on crowd sizes, owing to its success in combating the spread of the novel coronavirus.

Matches in Vietnam’s professional league were suspended in March but with no coronavirus deaths and just 328 confirmed cases, the communist country is eagerly pursuing a return to normalcy to get its economy back on track.

The stadium in Nam Dinh was close to its 30,000 capacity on Friday as the home side lost 2-1 to visitors Viettel in one of three opening V. League matches, where spectators stood shoulder-to-shoulder with few face masks to be seen.

Hand sanitisers were available as stewards performed temperature checks on fans, who were asked to wear masks as they entered.

“If we were scared of the virus we wouldn’t have come,” said Viettel fan Dinh Van Tam.
“The measures taken to fight the virus were good to keep our health safe, that’s why everybody is having fun.”

Vietnam has won praise for its aggressive coronavirus testing and a mass, centralised quarantine programme, putting it on course to revive its economy sooner than others.
The V. League’s decision to pick up exactly where it left off bucks a global pattern of countries preparing to restart leagues without supporters, while discussing changes to rules to handle fixture backlogs, the lack of atmosphere or fears about fans gathering outside grounds.

Leagues in Spain, England and Italy are set to resume later this month, while the German Bundesliga has already restarted with a haunting atmosphere at empty stadiums and muted goal-scoring celebrations.
Vietnam’s national team captain Que Ngoc Hai of Viettel said it was wonderful to see a full stadium.

“I’m not saying this to compare us with other countries, but Vietnamese football has returned after the COVID outbreak, it showed how well us Vietnamese have fought the virus,” he told Reuters.