The reigning champion will play no further part in Tuesday’s final, reported Olympics.com.

Biles’ withdrawal is a major blow for the US team. Last week, Biles became the first Olympic athlete to have her own customized hashtag emoji on Twitter Earlier, British tennis player Andy Murray withdrew himself from the men’s singles event of the Tokyo Olympics.

Murray was defending his Olympic gold medal but the British player decided to pull out in order to manage his workload.

However, he will continue to compete for Team GB in the men’s doubles tournament with Joe Salisbury.

“I am really disappointed at having to withdraw but the medical staff have advised me against playing in both events, so I have made the difficult decision to withdraw from the singles and focus on playing doubles with Joe,” said Murray in an official statement.

Also, American golfer Bryson DeChambeau and world No. 1 Jon Rahm are taking no further part in the Tokyo Olympics as they tested positive for coronavirus.

“For more updates on cricket and other sports, follow InsideSport.co and Moneyball for IPL and ISL players’ salaries.” 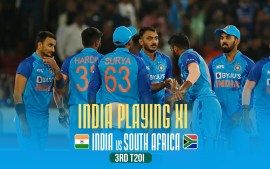