No hype. No media attention. India’s premier league badminton has also fallen flat on television viewership ratings. The Broadcast Audience Research Analysis data for Week 52 had badminton action on all seven days for prime time sports viewers on Indian television. Five out of seven days’ between December 23 and December 29 have registered ZERO viewership ratings on the BARC charts for the week.

The league was off the blocks on a damp note. The inaugural tie between Awadhe Warriors and Chennai was billed as the Saina versus Sindhu battle by the broadcaster. The rubber played amidst nearly empty galleries at Guwahati has also drawn a blank on television. The presence of top stars has failed to make on tube penetration among Indian masses.

Hyderabad-Lucknow game was not the only love-all affair for the league. The North East Warriors and Hyderabad match on Sunday, Monday’s Delhi versus Mumbai rubber, on Wednesday Chennai’s match with Mumbai and the Bengaluru-Delhi tie on Thursday have all drawn a ZERO on the ratings table.

There cannot be a bigger irony for the league and broadcaster Star Sports that the recorded highlights the senior national championships have registered relatively better viewership numbers during the week. 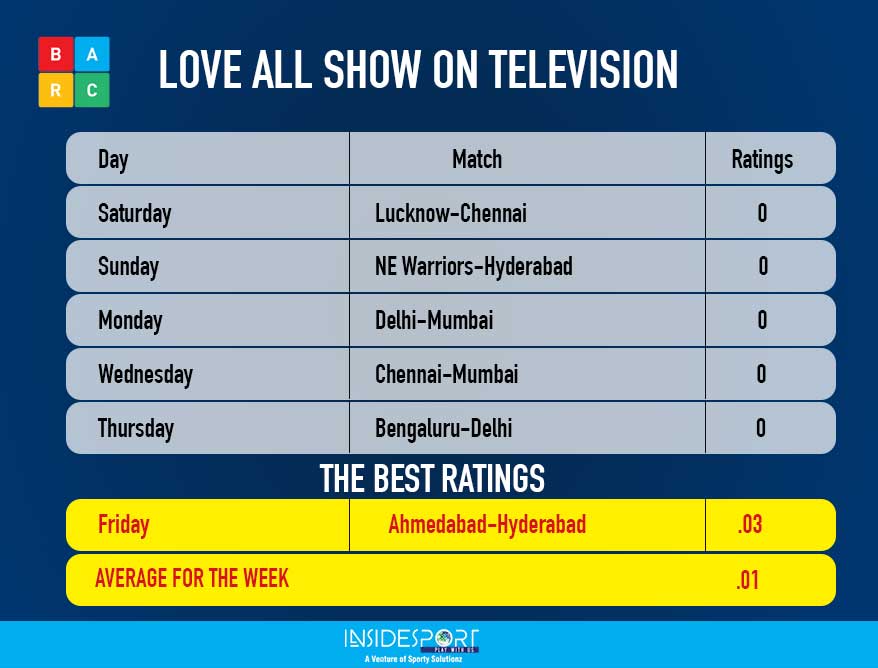 The Ahmedabad versus Hyderabad tie’s insignificant 0.03 ratings had one significance. The tie has spared the league from the embarrassment of drawing a blank in its opening week. For numbers sake, the ratings for the week have been 0.01.

The third and last T-20 between India and Sri Lanka happens to be the most watched programme in Indian television sports genre. The match broadcast in Hindi on Star Sports 1 Hindi has registered 2.55 ratings. The match has also accounted for the all top five sports shows for the week.

The match has drawn most viewers on Star Sports 1 Hindi and DD Sports for live broadcast with Hindi commentary.

In the absence of good dose of cricket and insignificant performance from other sports viewership data, after registering a 500% growth on the power of Rohit Sharma 35-ball century in he previous week, has fallen flat.

The sports broadcasters are in for a bigger loss in the coming week. There is no significant cricket broadcast between December 30 and January 5, 2018, the inaugural day of the South Africa Test series. It will be interesting to see what response Indian Super League and PBL draw for their respective broadcasters.