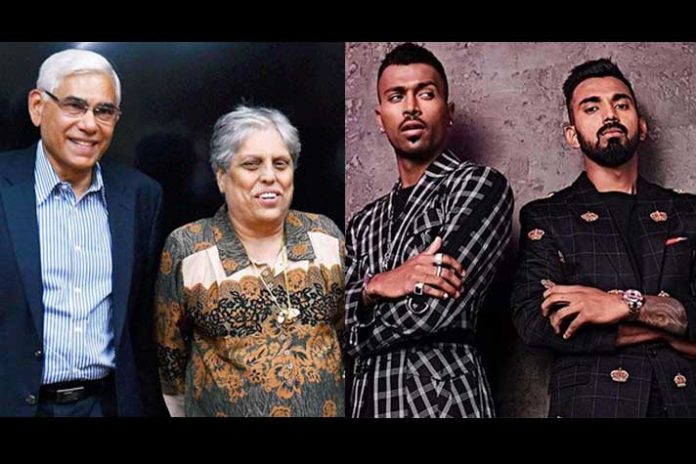 The Board of Control for Cricket in India’s Committee of Administrators seems to be heading on the path of collision yet again. While the CoA chief Vinod Rai is pressing for a “quick inquiry”, the other member Diana Edulji has expressed fears of a  “cover up” in the matter of national team suspended players Hardik Pandya and KL Rahul.

The duo has not been on the same page on the crucial issues like the removal and selection of the national women’s team coach and the #MeToo allegations against the BCCI CEO Rahul Johri.

Rai has proposed a “quick enquiry” into much-criticised comments made by suspended cricketers Pandya and Rahul but Diana Edulji fears it will be construed as a “cover up” job.

The two-member Committee of Administrators (CoA) is yet again divided and this time on how the inquiry into the latest controversy should be conducted. Pandya and Rahul, who attracted widespread criticism for their misogynistic comments on TV Show ‘Koffee with Karan‘, will be back in India by Saturday or early Sunday.

In another round of unfriendly email exchange, excessed by PTI, Diana has expressed her reservation at BCCI CEO Rahul Johri, who himself was embroiled in sexual harassment case, conducting preliminary inquiry and fears a “cover up”.

Rai on his part wants the inquiry to be finished by second ODI as delay in completing the procedure would affect the team strength. “We should be in no hurry to conduct the inquiry as it would then look like a cover up job being done,” Diana wrote in her email response after Rai wanted inquiry to be completed quickly as team strength has gone down from 15 to 13.

“We must take a view by the time second ODI gets over as we cannot afford to debilitate team strength due to delinquent behaviour on the part of some player,” Rai had written.

While legal team had advised appointment of an ad-hoc ombudsman for which Rai wants the view of amicus. However, Diana wants CoA and office bearers to be part of the inquiry as CEO’s presence will be perceived as “bad optics” according to her.