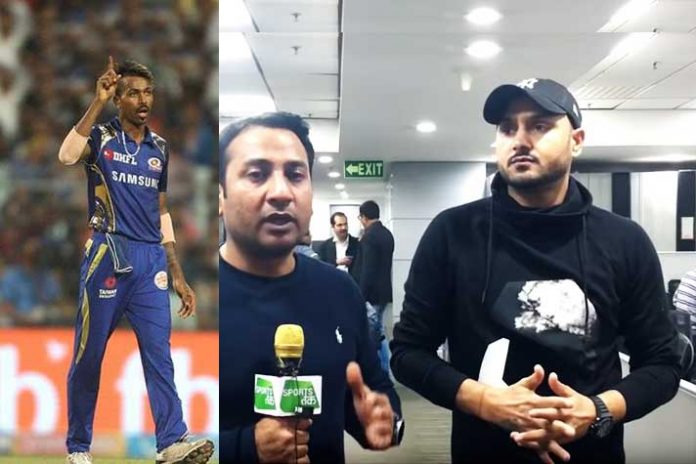 Hardik Pandya and KL Rahul may run into trouble with their Indian Premier League franchisees as well. India’s most successful off-spinner an ex-Mumbai Indians member Harbhajan Singh has hinted that the team ownership is not going to take the irresponsible comments lightly.

KL Rahul and Hardik Pandya are under provisional suspension for their sexist remarks on the Koffee With Karan infamous episode. They face fresh show-cause notices and a Board of Control for Cricket in India inquiry. The backlash from sponsors has started with Gillette announcing suspension of Pandya as the face of Gillette MACH 3 Start.

The real trouble may still unfold on the franchisee’s front.

Harbhajan has dropped strong hints in a Sports Tak live chat that Mumbai Indian team ownership is not going to take Pandya’s comments on the Karan Johar show lightly.

“He (Pandya) has also put a big question mark on the Mumbai Indians (image). That family (the Ambanis) values their goodwill and self-respect the most. Every Mumbai Indians team member is a member of their extended family. I have experienced that in my ten years with the team. You (Pandya) have put a blot on that family. I don’t think they will take it lightly. They put self-respect and self-esteem above anything else,” Harbhajan told on the show, while slamming the duo for bringing the sport and cricketing fraternity to disrepute.

“We still don’t know what will be the eventual outcome of this entire episode. But what transpired during the show was grossly wrong. Aggression on the field to win for your country is different, but what he (Pandya) said on the show was a foolish statement that has brought the cricket fraternity to disrepute.

“People may now have similar view about us (other cricketers) as well.  They may think all the cricketers have a similar lifestyle. It has never happened during our days. The fraternity is not like this,” said Harbhajan.

“I have played with Pandya. He got carried away. He must know how to handle this new-found fame, stardom and money. I cannot watch such an episode with my parents. I will not like my wife and kids to travel in the bus with people who have no respect for anyone. Even if you get the BCCI nod to be at a show which has this kind of a format, you cannot utter words which are damaging to the entire cricket fraternity. You have inflicted on a damage to Sachin Tendulkar, Virat Kohli, Harbhajan – we are part of this community. People may  form similar opinion about us,” said Turbanator, mincing no words while expressing his anguish and disappointment.

Harbhajan’s views on Sports Tak, India’s most followed online sports news channel, are in the link below.

Pandya, a regular with the Mumbai Indians since 2015, has a ₹ 11 crore contract with the Reliance Group-owned franchisee for the IPL 2019.

Meanwhile, cricket fans are also building pressure on Mumbai Indians and Kings XI Punjab to drop Pandya and KL Rahul for the Indian Premier League 2019. Twitter is abuzz with calls to keep the duo out of the IPL.