ISL 2021-22: Chhangte, Thapa on target as Chennaiyin edge out NorthEast United in a thrilling contest: Goals from Lallianzuala Chhangte and Anirudh Thapa saw Chennaiyin FC register their second win on the trot in their current Indian Super League campaign. The Highlanders pulled one back through VP Suhair but in the end, it was not enough as the Highlanders remain winless after three matches.  Follow NEUFC  vs CFC LIVE & ISL 2021-22 LIVE Updates on InsideSport.in

Lallianzuala Chhangte (41′) broke the deadlock with a powerful shot from a defensive error but VP Suhair (50′) made the most of the Chennaiyin goalkeeper being out of position to equalise. Captain Anirudh Thapa (74′) sealed the deal with a fine strike.
a
Federico Gallego’s return to the starting XI for the first time this season headlined team news even before the first whistle. Mathias Coureur too came back into Khalid Jamil’s team. Meanwhile, Narayan Das had a new role at centre back for Chennaiyin as Jerry Lalrinzuala assumed his position at left back.

Apart from a moment where it seemed Lallianzuala Chhangte had beaten Subhasish Roy Chowdhury’s nearside to squeeze a goal, it was all NorthEast in the opening exchanges.

Gallego’s quality was on display as he peppered the Chennaiyin defence several times. VP Suhair and Laldanmawia Ralte too had a few sniffs in the opposition box to keep the Highlanders on top.

Unfortunately, Gallego could only last 24 minutes as he pulled up injured yet again. NorthEast United, already missing the services of Deshorn Brown in the game, had to put in Pat Flottmann, going in for an added defender.

The game was thrown open with chances at both ends. Suhair’s header from a long throw-in was saved by Vishal Kaith and then Hernan Santana’s long-ranger went inches above.

Chhangte, who had earlier blazed over the bar, made amends before half time. After some exquisite counter-press through the right, Reagan Singh squared the ball into the box. Khassa Camara mistimed his interception and Chhantge pounced onto the ball to slot it home after a deflection off the bar.

Jamil made two changes post the break and results immediately showed. Five minutes in, VP Suhair, relatively unmarked, had no problems in guiding the ball past Vishal Kaith from a long-throw in by Provat Lakra. NorthEast had found the equaliser with more than 40 minutes to go. 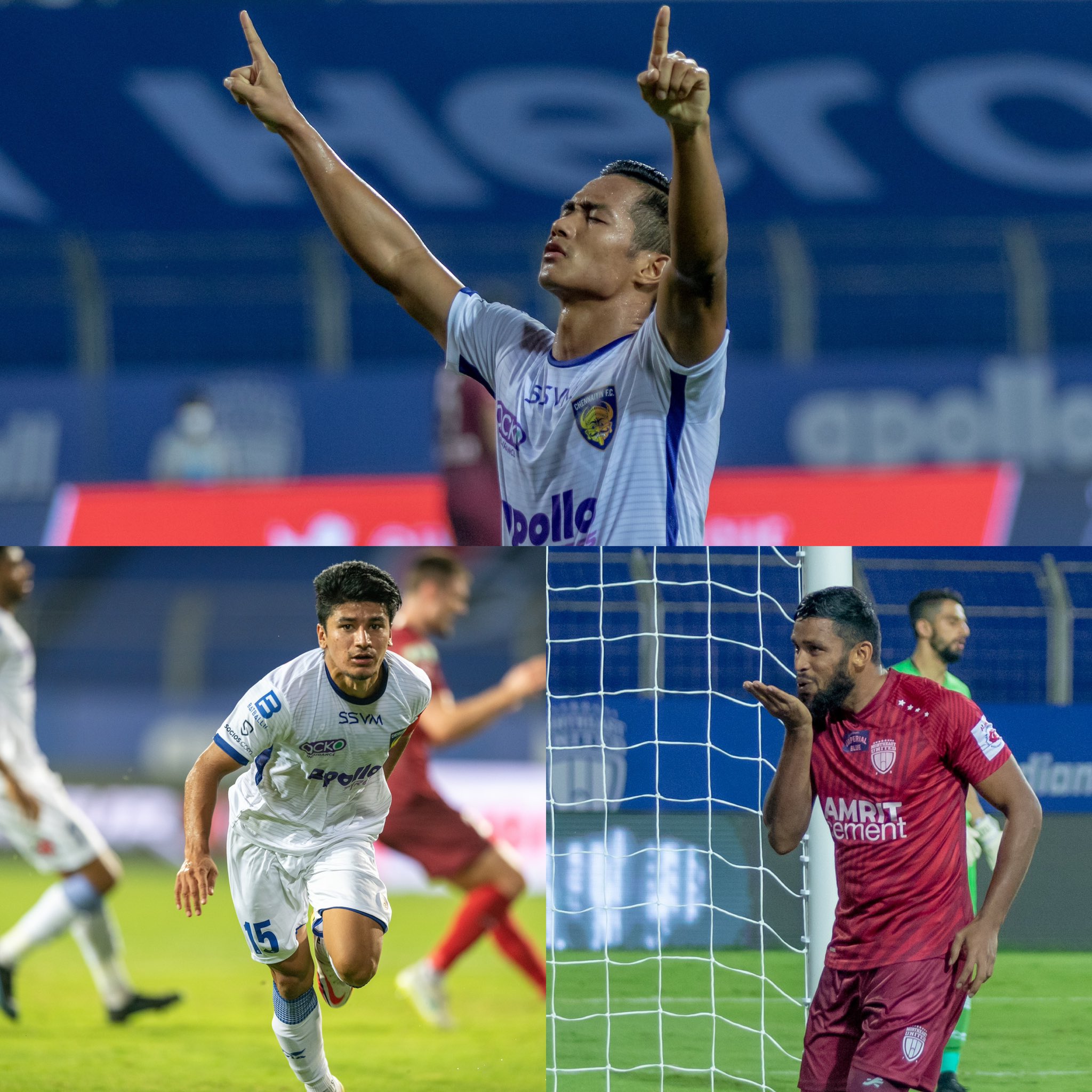 Lalkhawpuimawia shot wide despite having an empty net to aim at. Gurjinder Kumar’s long ranger took a deflection off Slavko Damjanovic and ricocheted off the post. With Kaith, yet again out of position as he was for the goal, the Mizoram-born striker failed to hand his team the lead.

Post the hour mark, Mirlan Murzaev found the back of the net but Rahim Ali’s through ball to the Kyrgyz was deemed offside.

It was then the new captain, Thapa to have his final say in the game. Murzaev laid in the midfielder from a long ball. Thapa sprinted full pace to go past marker Camara and shoot fiercely to restore the lead, crucially closing the game for Chennaiyin FC.