IPL 2022: A “proud” Gujarat Titans’ (GT) skipper Hardik Pandya on Tuesday said his side’s plan to be ruthless on the field and relax post game paid rich dividends as they beat Lucknow Super Giants (LSG) by 62 runs to become the first team to qualify for the IPL playoffs here. Follow all the IPL 2022 LIVE Updates with InsideSport.IN 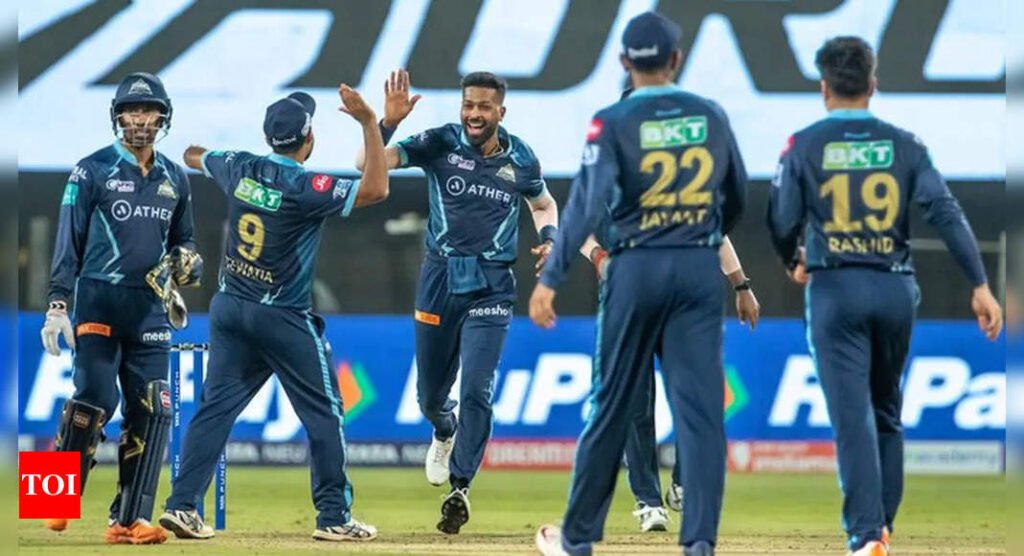 IPL 2022 Playoff Scenario: Gujarat Titans Officially First team to qualify for Playoffs after win over LSG, Check Where others stand?

Newcomers GT ensured their place in the last-four with 18 points from 12 games, while LSG are a close second with 16 points from 12 matches and need a win to secure their play-off berth.

“Really, really proud of the boys. It is a great effort to qualify before the 14th game in this league. We just wanted to be ruthless today, and relax post game,” Hardik said at the post-match presentation ceremony.

The win came after back-to-back defeats for GT and Hardik said his side learnt a lot from their last game.

“To be honest, in the last game, we kind of thought that the game was over before it was over. We were always under pressure in all the other games that we won, and we felt that we’d finish off the last game with the kind of batting we had. That was learning we took,” he said.

“I always feel that if you lose a game like the one we lost in our last game, we win and lose games as a team. Yes, we did not do what we wanted to do. We messed it up, but we messed it up as a team.”

Defending 145, GT bowled out LSG for 82 in 13.5 overs and Hardik was full of praise for his bowling unit.

“Our bowlers did everything that we asked of them, and we ticked all boxes today.”

While LSG skipper KL Rahul lauded the performance of his bowlers, he came down hard on the batting unit for its below-par show.

“It looked like a tricky wicket, that’s how it’s played here for the last 2 or 3 games that we have played here. We knew it was a low-scoring game, we knew it was a tricky and challenging pitch, we bowled really well. Restricting a team under 150 on any pitch is commendable and the bowlers did their job,” Rahul said.

“We should have batted a lot better. Some poor shot selections, a run-out didn’t help, good learning for us, hopefully we can learn from a loss like this. Sometimes you need a little bit of a reminder to keep turning up every game and keep trying to do our best,” he said.

Afghan spinner Rashid Khan, who starred with the ball for GT with figures of 4 for 24, feels he eventually got his line and length on Tuesday, which was missing in the initial few matches, resulting in fewer wickets for him.

“Those couple of games which did not go well was all about my line and length. That was something I was missing in those games.

“The pace I bowl and action I have, I cannot afford to lose my line and length, it was about focusing on hitting the right area. The wicket was helping today with bounce and turn, but overall it was about bowling in the right areas,” Rashid said.
Man-of-the-Match Shubman Gill, who top-scored with an unbeaten 63 off 49 balls, was pleased with his performance but said he faced a bit of back issues during his knock.
He, however, ruled out any major problem with his back and expects to be ready for the next game.
“Always pleasing when you’re there till the end and finish the game for your team. Not a lot of people gave us a chance at the start, but great to qualify now. The ground was soft and I had a bit of back issues, but hopefully it would all be fine by the next match,” he said.
IPL 2022: GT skipper Hardik Pandya proud of his team for being ruthless against LSG; Follow all the IPL 2022 LIVE Updates with InsideSport.IN
Follow InsideSport on GOOGLE NEWS
Share
Facebook
Twitter
Pinterest
WhatsApp
Previous articleWWE NXT Results: Top 3 Moments of WWE NXT, Natalya Shows Respect, Solo Sikoa Fights Back, and More
Next articleGT beat LSG Highlights: Gujarat Titans confirm PLAYOFF spot, MAUL Lucknow Super Giants by 62 runs as Rashid Khan & Shubman Gill star in victory
- Advertisement -