Meanwhile, ECB has said it will investigate after police were called to break up a drinking session.

An ECB spokesperson said: “During the early hours of Monday morning, members of the England and Australia men’s teams shared a drink in the team areas of the hotel in Hobart.

“The hotel management received a noise complaint by a hotel guest and, as is commonplace in Australia, the local police attended the scene. When asked to leave by hotel management and the Tasmanian police, the players and management in question left and returned to their respective hotel rooms. The England party have apologised for any inconvenience caused.

“The ECB will investigate further. Until such times, we will make no further comment.” 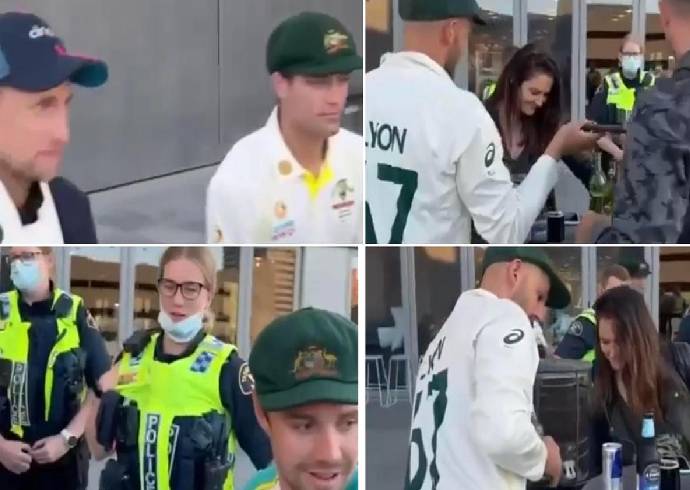 They were asked to stop drinking and leave after receiving noise complainants. The wall clock showed 6.30 am showing the cricketers had stayed up all night to celebrate Ashes victory. “Police moving on early morning Ashes party,” wrote a local correspondent.

“Time for bed. Thank you.

“They just want to pack up.”

“Tasmania Police attended the Crowne Plaza Hobart on Monday morning after reports were made of intoxicated people in a function area,” police said.
“The guests were spoken to by police just after 6am and left the area when asked. No further action will be taken by police.”

Usman Khawaja shared the video with Nathan Lyon taking centre stage with Ashes trophy and saying: “We are the champions” to the crowd.

Ashes 2022: Despite Ashes debacle, Chris Silverwood wants to follow Joe Root and carry on as England coach but admits ‘Job under scrutiny’

Steve Smith Also shared a video from the celebrations as Aussies sang Sweet Caroline with the Barmy Army.