When is Battlegrounds Mobile India releasing for iOS? Kronten Gaming & Ghatak Speaks about the delay

When is BGMI releasing for iOS? Kronten Gaming Speaks about the BGMI iOS version release. After a series of events & potential threats of another ban on the game, Battlegrounds Mobile India has overcome all the odds & successfully launched its official version on Google Play Store today. The Battle Royale game that was released in 2018, rose to great heights in India both as an Esports title & a widely praised mobile gaming experience. However, while android users have been able to access the game since the launch of its early access, iOS users have been excluded from the Battlegrounds Mobile India experience since the very beginning.

Previously, before the launch of the beta version, Krafton had posted on website’s support section that the iOS version for Battlegrounds Mobile India will indeed be released soon. As there was no pre-registration for iOS users, all the players turned to the content creators for some assurance. Popular Esports personalities like Ghatak had stated that the game will come on the same day it’ll have an official launch for Android users. Now, while the game is out there for every android user to download, iOS players still haven’t got a clue about a release date.

Kronten, who is an Owner and a Player for Team GodLike Esports, has played a huge part in speculations that were buzzing around during the pre-release state of BGMI. Recently, on his livestream, he shared that he only got to know about the android version’s official release just few hours before the launch today. Now, in a community update on his official YouTube channel, the gaming influencer has posted, “It’ll take a while before the game comes on iOS devices. We have to wait for a few more days.”

As of now, most players have no idea regarding the iOS release date. Krafton itself haven’t spared a word regarding this on the social media updates the company posted today. Right now, we can only hope that these few days do not turn into weeks & prolong the suffering of iOS users. We will update you once anything solid drops concerning this matter.

Ghatak on his Instagram story also shared something similar. Check what he said below. 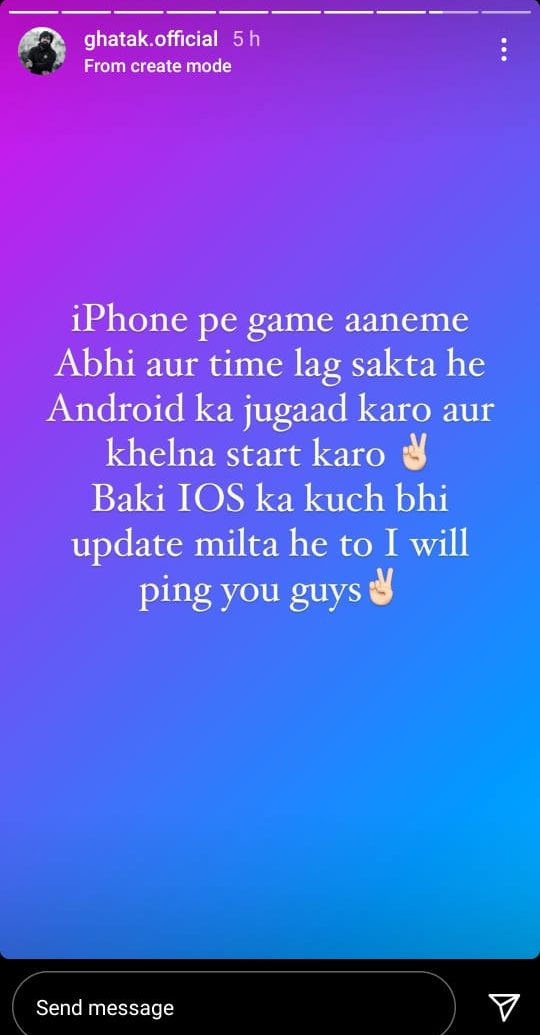