ISL 2021-22: Goals from Len and Lima helps clinical Jamshedpur FC edge past ATK Mohun Bagan Jamshedpur FC continued their unbeaten run in the season as they handed ATK Mohun Bagan their successive defeat, downing the Mariners 2-1 in their latest Hero Indian Super League (ISL) encounter at the Athletic Stadium in Bambolim on Monday. Follow all the Live Updates of ISL 2021-22 only on IndsideSport.IN

The win takes Jamshedpur to the second spot in the points table as Bagan slump to number 5, a lesser known territory for them.

Seiminlen Doungel (37’) scored the opener for the Men of Steel with a sublime finish from the right flank. Alex Lima (84’) scored the second after coming on as a substitute late in the second half. Pritam Kotal (89’) pulled one back for the Marines but it ended as too little too late to affect the final scoreline.

Ashutosh Mehta and Sumit Rathi made their way into the starting lineup for ATK Mohun Bagan. As for Jamshedpur FC, Peter Hartley started the game against the Mariners with Pronay Halder also taking the field and Alex Lima starting from the bench. Owen Coyle fielded a 4-4-2 formation while Antonio Lopes Habas chose his tried and tested 3-4-3 formation.

As the match started, Eli Sabia straightaway went into the referee’s book by getting a yellow card in the fourth minute. At the stroke of the 33rd minute, Amrinder Singh saved a powerful left-footed low curling shot from Greg Stewart from the right flank. Moments later, Seiminlen Doungel found space on the edge of the box at the right flank and made no mistake in hitting the ball past Amrinder’s right side to give JFC the lead.

Roy Krishna looked to have scored the equaliser in the 40th minute. His shot from a narrow-angle escaped TP Rehenesh’s grip and was rolling inside the goal but Eli Sabia was quick to react and cleared the ball from the line. Just before halftime, Boris Singh replaced the goalscorer Doungel who had to leave the pitch after suffering an ankle injury.

Roy Krishna received a yellow card for a challenge on Hartley which left the latter in some pain. JFC went into the break leading ATKMB by a single goal with work left to do for the Kolkata-based club.

The second half got off to a cagey start with both teams struggling to create clear scoring chances. At the hour mark, Habas brought on Prabir Das (for Rathi) and David Williams (for McHugh) to instil more energy and fresh legs on the pitch. A brilliant volley from Jitendra Singh on the 67th-minute mark was blocked bravely by an ATKMB defender. Liston Colaco made an appearance from the bench after replacing Manvir Singh who did not impress in the attack tonight.

There was a huge controversy on the stroke of 73rd minute after Pronay Halder brought down Hugo Boumous who was marauding towards the goal unchallenged. He got a yellow card for the offence and Boumos also received a yellow card for pushing Halder in retaliation for the tackle. Stewart and Rehenesh then received yellow cards for causing unnecessary delay in the proceedings. 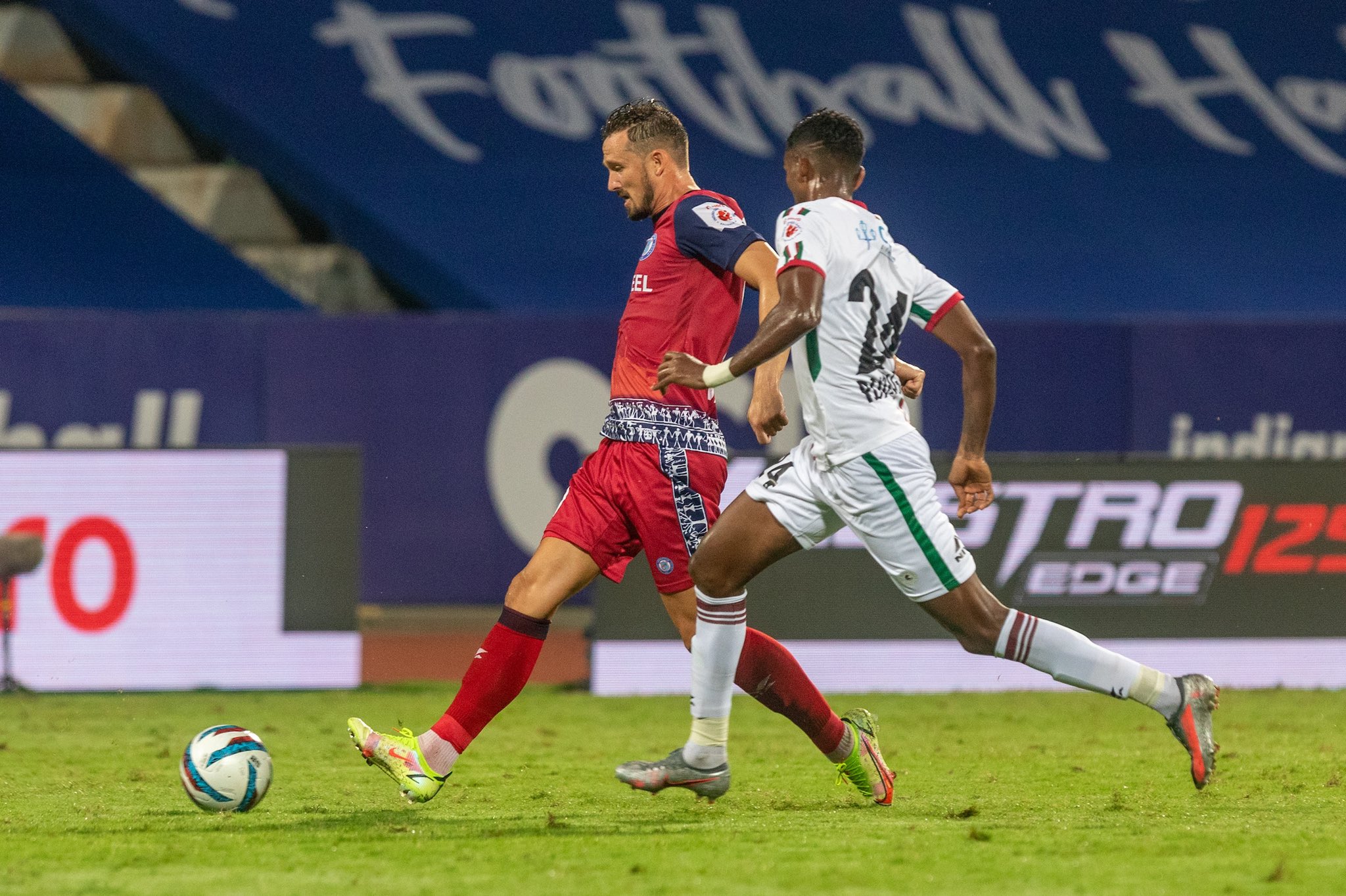 Alex Lima took his place on the pitch from the bench, replacing Stewart and the Brazilian scored within seconds after entering the field. A left-footed shot from the edge of the penalty box towards the left side of Amrinder gave the latter no chance of saving it.

Later, keeper TP Rehenesh made a good save of a cross from the left flank inside the box but his clearance hit Ashutosh Mehta. Pritam Kotal lunged ahead to put the ball inside the back of the net. JFC appealed for an offside but the referee awarded the goal.

Jordan Murray and Narender Gahlot also made short cameos from the bench before the final whistle. Owen Coyle’s men defended their lead resolutely and secured an important win over last year’s runners-up.