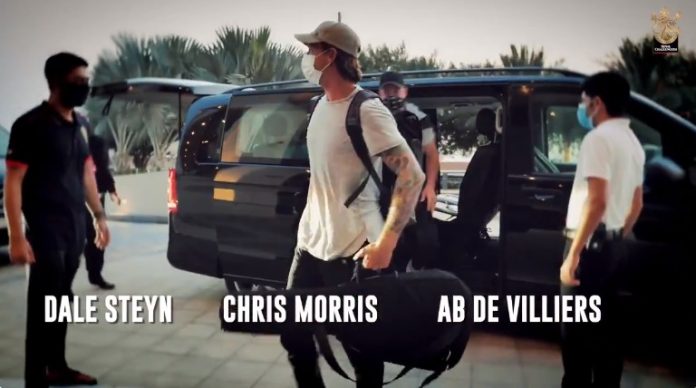 The 13th edition of Indian Premier is Scheduled to begin in UAE from sep 19 to nov 10 and almost all the IPL franchise teams already arrived in UAE to their respective luxurious hotels. IPL franchises like Kings XI Punjab, Rajasthan Royals, Kolkata Knight Riders landed in Dubai on Thursday while  Royal Challengers Bangalore, Mumbai Indians, and Chennai Super Kings reached  on Friday. Now all the fans are waiting for Delhi Capitals and Sunrisers Hyderabad who will reach Dubai on Saturday. The teams will be staying in different hotels in Dubai and Abu Dhabi.

RCB posted a special video of these (Ab de Villers,Chris Morris and Dale Steyn) players arrived in UAE. while sharing the post RCB wrote”And here it is RCB fans, the moment you’ve all been waiting for Ab de Villers said” “I am very excited. I am very happy to be here, the travelling was a bit different to normal but we made it here with South African friends. We are very happy to be back in the RCB family, looking forward to this year. Looking forward to settle, pack the bags out and get the fuel for what we are in for this year. Excited to meet the new players,” de Villiers said in a video posted by RCB on Twitter.Now As per the BCCI SOP, players undergo several Covid 19 tests and testing will be done on day 1, 3 and 6 and after that teams can start training for the league, beginning September 19.

And here it is RCB fans, the moment you’ve all been waiting for! ?@ABdeVilliers17, @DaleSteyn62 and @Tipo_Morris have joined the team in Dubai! ?#PlayBold #TravelDay #IPL2020 pic.twitter.com/l0n09ZV5Jb

The team will be based out of the Waldorf hotel in Dubai for the tournament’s entire duration. A dedicated block of the hotel has been booked for the team, informed RCB chairman Sanjeev Churiwala. Hilton property calls itself as haven within the vibrant city of Dubai. The Waldorf Astoria Dubai Palm Jumeirah boasts a private soft-sanded beach, six distinct restaurants and lounges and elegant sea-facing guest rooms and suites.