ENG vs SA Highlights: England SA DAY 5 Highlights: England WIN by 9 wickets: England have registered a 9-wicket win over South Africa in the Oval Test to take clinch the series 2-1. Chasing 136 to win, England made a brilliant start with Zak Crawley and Alex Lees adding 108 runs for opening stand. While Kagiso Rabada removed Alex Lees, it was too little too late. In the end, Ollie Pope and Crawley scored the required runs to register second straight Test series win at home: Follow England vs SouthAfrica 3rd Test LIVE Updates with InsideSport.IN

Zak Crawley and Ollie Pope steered England to an impressive nine-wicket victory over South Africa at The Oval on Monday to complete
a 2-1 series victory and put the seal on an astonishing turnaround in fortunes for the home team this year. England started the day at 97-0 needing another 33 to win and picked them up in 27 minutes for the loss of Alex Lees for 39. Crawley finished on 69 not out, with Pope unbeaten on 11.

The victory made it six wins from seven Tests this summer, following a 3-0 beating of New Zealand and a win over India, all following an awful run that brought one win from the previous 17 Tests and led to the arrival of Ben Stokes as captain in place of Joe Root.

England had reached 97 chasing 130 before bad light stopped play on Sunday’s fourth day, with Crawley racing to an impressive 57 and Lees, who had been dropped from the first ball of the innings, on 32. On Monday a small but healthy crowd took advantage of free entry to observe the last rites, in stark contrast to Sunday when a full house was treated to an amazing day’s action.

The two openers, under considerable pressure after regularly failing to establish any sort of platform this year, had maintained England’s aggressive approach on Sunday to effectively make the game safe. The 100 partnership came up in the first over on Monday, the 18th of the match, and was England’s fastest ever for the first wicket.

However Lees, twice dropped in the slips in the first two overs of the day, fell lbw to Kagiso Rabada for 39 in the third after a
review overturned the umpire’s not out decision. There were no further scares though as Crawley thumped a stylish back foot cover drive to the boundary to finish the match and earn a huge personal confidence boost.

It was the third time in a row the Test had effectively taken less than three days, after Thursday’s play was washed out by rain and Friday was cancelled as a mark of respect following the death of Queen Elizabeth. On Sunday South Africa’s inexperienced batting lineup had no answer to England’s swinging seam attack, slumping from a strong start to 169 all out to hand the initiative to the hosts.

ENG VS SA Day 4 Highlights: Early on Day 4, England were bowled out early after bringing up a lead of 40 runs. Earlier, South Africa continued their strong comeback on DAY 4 with the ball after a disastrous batting performance. England could only add three runs as they were bundled out for 158. With that, the hosts took a slender 40-run lead in the 3rd Test. Marco Jansen was the star with the ball, bagging a fifer while Kagiso Rabada who was quite expensive, returned with four wickets.

In reply, South Africa was bowled out for just 169 runs in their second innings.  Skipper Dean Elgar was the highest scorer for his team with a 36-run knock. Ben Stokes and Stuart Broad both scalped 3 wickets each while James Anderson and Ollie Robinson bagged 2 wickets apiece.

Day 3 REWIND: South Africa began their innings on a poor note with the top order crumbling down like a pack of cards. At a stage, the visitors were reduced to 32/5 with Ollie Robinson spitting fire with the ball. Khaya Zondo (23) and Marco Jansen (30) tried to rescue the innings till they were bowled out for 118. For the hosts, Ollie Robinson finished the innings with a stunning fifer.

England tried to get a strong start but lost both their openers early. Ollie Pope (67) with Joe Root (23) steadied England’s ship after Marco Jansen disrupted the hosts. The Proteas piled up their pressure and went on to inflict damage on the hosts as the English side lost their entire middle. In the end, England ended day 3 with a 36-run lead. As for the visitors, Marco Jansen shone with the ball after scalping 4-wickets.

Cricket to Resume and Pay Tribute to Her Majesty Queen Elizabeth II pic.twitter.com/UuHn6BIemT 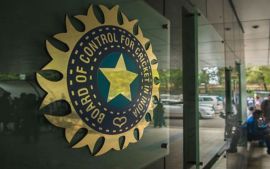