That is a risky foul by Jae Crowder. It won’t be called a flagrant, but it probably should be. You can’t grab someone around the shoulders, it’s too much of an injury risk. As Steve Javie says on the broadcast, that’s not a basketball play.

The Suns call timeout as the lead is cut to 10. LeBron just snuck behind the defense and got the lob from Marc Gasol. Phoenix is still well in control here, but the Lakers are at least making it interesting.

That is a very, very generous continuation, and we’ll probably see a challenge as a result. LeBron was fouled on the catch.

He dunked afterward, but it seemed like the Suns stopped defending because they heard the whistle. Expect this one to be overturned if the officials look at it.

Kyle Kuzma just held up in the post against DeAndre Ayton. Cameron Payne ended up scoring, but it’s still an impressive showing.

The Lakers have inserted Montrezl Harrell at the center. This is smart. They needed an offensive jolt.

The Lakers might have to go to Montrezl Harrell if these offensive struggles keep up. He’d get attacked on defense, but they just cannot put points on the board right now. Harrell would at least be a jolt of energy for them.

Smart play by Marc Gasol. He gets the side swipe call there when he really had nothing going on offense.

Anthony Davis will not return in this game

Anthony Davis injury from the first half pic.twitter.com/twbF75RSJi

Mark Jackson is arguing that the Lakers should go with Marc Gasol at center for his post defense and shooting. Drummond has struggled mightily against DeAndre Ayton here.

It is very, very rare that the Lakers get beaten in transition, but right now, the Suns are playing too fast for the Lakers while they’re struggling to generate the same opportunities in the fast break themselves.

Frank Vogel loses his second consecutive challenge on a foul involving Jae Crowder. He’ll take three free throws with a chance to push the lead up to seven.
Here’s what we know about Anthony Davis at the moment, limited as the information is: he hyperextended his knee at the end of Game 3. He played through it and started today, but struggled mightily. He has six points on nine shots thus far.Then, at the end of the first half, he fell to the ground holding his right leg, the same leg with the hyperextended knee. It isn’t clear if he aggravated that injury or if he injured a different part of the body. For now, the Lakers have offered no official update on his status. He is still in the locker room.

There’s no official update on Anthony Davis. The Lakers have Kyle Kuzma at power forward to start the half.

Sorely needed jumper for Anthony Davis. That’s only his second made field goal in Game 4 after dominating Games 2 and 3. The Suns are happy to give him that fadeaway jumper though.

Chris Paul just passed up a wide-open 3 to pass the ball. You have to wonder if his two early misses scared him off of the shot. He still hasn’t made a 3 since Game 1.

It works out for Phoenix though, as he goes to the line with the Suns in the bonus.

The Lakers just playing volleyball at the rim right now. Wes Matthews was short on that 3 but Davis tried to tap it in any way. It didn’t work, because this is basketball, not volleyball.

Phoenix moves back to a starter-heavy lineup and the Suns cut the lead to four, but then McLemore gets it back up to seven with his second 3.

Chris Paul just attempted his second 3 of the game, which is also the second 3 he’s attempted since hurting his shoulder. Neither has gone in.

Jeff Van Gundy just gawking at the king. “A jump behind the back bounce pass” can officially be checked off of your LeBron James bingo card. Lakers lead 32-25 after that Ben McLemore 3.

Ben McLemore is getting rotation minutes again today. Is that due to KCP being out? The Lakers need to maximize spacing with these bench lineups, where the LeBron-Drummond pick-and-roll is paramount.

Marc Gasol is making 3’s in this series, but never consecutively. It seems like the pattern is, he comes in, makes his first, then misses his second, and we move on from there.

Marc Gasol for 3, and that’s what he brings that they sorely need. The Lakers are shooting 27% from 3 in this series, and that has completely gummed up most of their half-court offense. Gasol gives them sorely needed space. That helps them get to the basket as well.

First shot of his first Playoffs start as a Laker. Did you expect anything less? pic.twitter.com/rs2Vj0J7ph

The Lakers just inserted three subs at once: Gasol, Caruso, and Kuzma. They usually start with only one or two, but perhaps KCP’s absence has changed the rotation. Wes Matthews is in the game as well, though he started today, leaving the Lakers with four players that don’t usually start.

Chris Paul just attempted his first 3 since injuring his shoulder. It missed, but that’s still a big development. Let’s see how willing he is to go back to that.

Great way to start the game from the Big Fella! pic.twitter.com/Ngf0loeKRZ

Anthony Davis goes to the line. That’s nothing new in this series. He’s taken 35 free throws over the past two games, really taking advantage of that matchup against the smaller Jae Crowder as well as Phoenix’s overall limitations in rim protection. That’s been one of the differences since Game 1.

LeBron coast-to-coast to tie it at two. That’s how the Lakers are going to need to get him going. They have so little spacing that asking him to generate his typical shots in the paint might not be realistic.

Mikal Bridges missed the shot, but it interesting little sequence for the Suns there. Chris Paul has struggled to pass across his body all series, and he was slightly off-target on that one, but the fact that he was even capable of firing a fastball like that into Bridges is encouraging for the Suns. 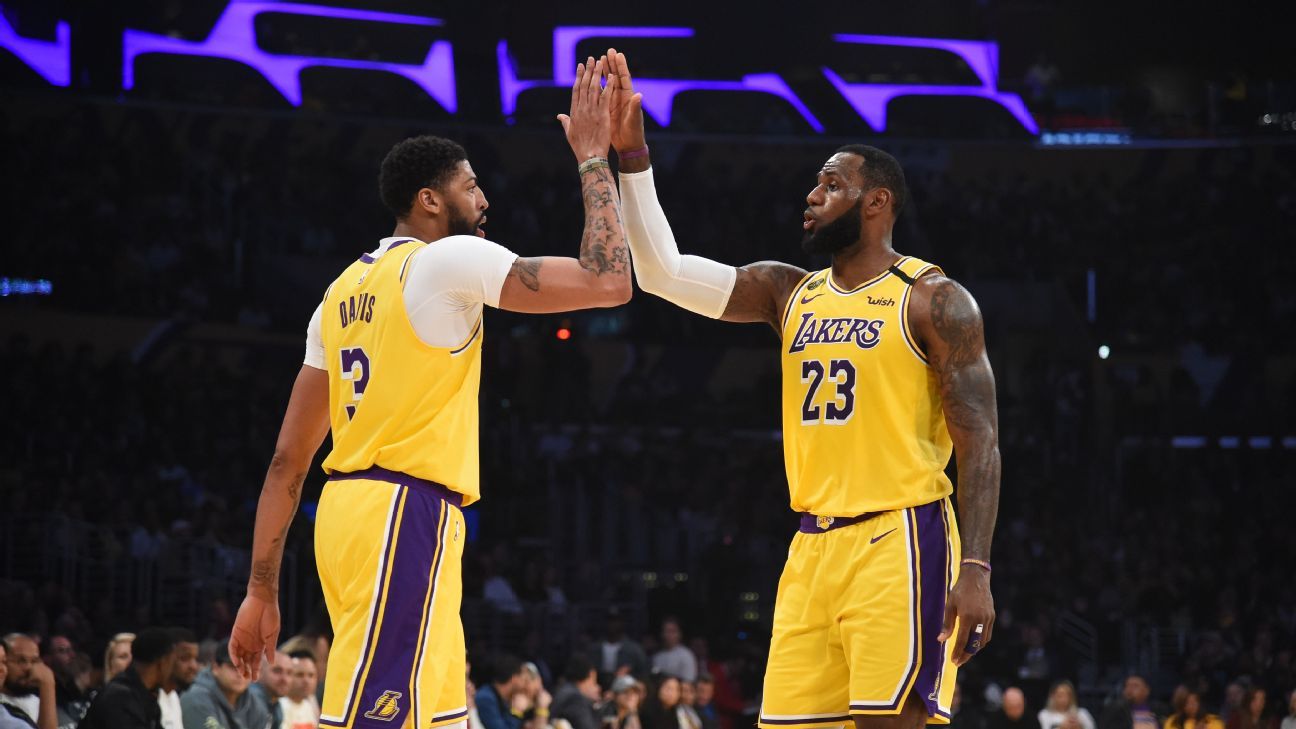