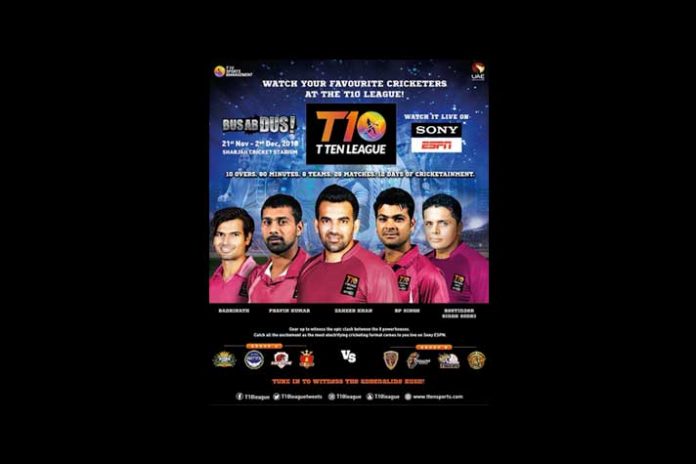 The T10 League has lined-up a strong presence of senior Indian cricket stars for the second edition, scheduled to start in Sharjah next month.

Zaheer Khan, S Badrinath, RP Singh, Praveen Kumar and Under-15 Lombard World Cup-winning captain Reetinder Singh Sodhi have been confirmed in the starting Indian line-up of five players. The organisers are in talks with some other leading Indian names. The target is to have at least one Indian representation in all the eight teams.

The strong list will include only the retired Indian cricketers as the Board of Control for Cricket in India has a policy of not permitting its registered, current players for professional cricket leagues except for its own Indian Premier League.

While Zaheer Khan has confirmed his signing for the league, the other players are maintaining a silence as they await further clarification on the BCCI policy for the retired players.

Virender Sehwag, the lone Indian to participate in the inaugural T10 League last year, has though gone public with a social media post to welcome all the five players into the T10 League.

Sehwag, who had captained the Maratha Arabians last year, is among the league’s brand ambassadors now.

Praveen Kumar has bid adieu to all forms of cricket only last week, while RP Singh had announced his retirement a couple of months ago.

The league, this year extended to eight teams from six in the first season, will feature 10-over-a-side 29 matches of the 90-minute duration over the 12 days from November 21 to December 2.