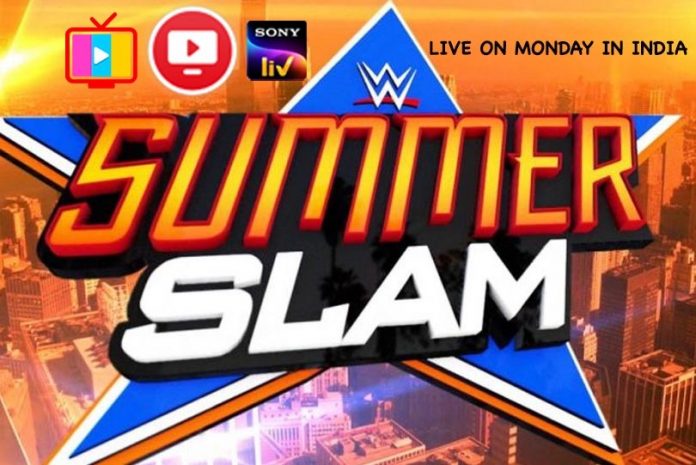 WWE SummerSlam Streaming: So it is final! We have total eight mammoth matches for this Sunday’s SummerSlam. However, there are chances that one or two matches may be added at the time of kick – off show.

This SummerSlam would be extravagant to watch since there would be virtual greet and meet plans for WWE Universe which we also saw earlier in the latest episode of SmackDown Live with an epic arose of WWE ThunderDome.

SummerSlam comes under one of the top four PPVs of WWE and there is no secret behind that why it is called as the biggest party of the summer since it always brings the best out of it.

From all the confirmed matches we will  have six Championships on the stake and while remaining three have bizarre kind of stipulations which includes – A “No Disqualification” match, A “Street Fight” and “Falls count anywhere” match for WWE Universal Championship.

So, while concluding all these let us now check the final eight matches in full detail from both RAW and SmackDown for this SummerSlam

You never saw THIS coming.@35_Dominik battles @WWERollins in a #StreetFight THIS SUNDAY at #SummerSlam! pic.twitter.com/i5P7NhSd5m

WWE has added a stipulation for Seth Rollins and Dominik Mysterio’s match at SummerSlam that it would now be a “Street Fight” match. This match has become official after both these belligerents went into a brawl in the two week on WWE Raw. Seth Rollins eagerly accepted the challenge of Dominik Mysterio to battle out at SummerSlam 2020 and vowed to give Dominik the same taste as he has done to his father Rey Mysterio at Extreme Rules.

A Triple Brand Battle Royal match took place last week on SmackDown Live to decide Bayley’s opponent for her SmackDown Women’s championship at SummerSlam. Women from all three brand participated in this Battle Royal, however, a surprising entrance of Asuka changed the scenario of this match.

Braun Strowman the current WWE Universal Champion will defend his title against “the fiend” Bray Wyatt this Sunday at SummerSlam. Despite that earlier this match was just announced as a Championship match. But after the latest episode of SmackDown Live when Braun Strowman chock slammed Bray Wyatt at backstage and as a result of it Wyatt caused minor injury and sent off on a stretcher.

This brawl now led us to a “Fall count anywhere” championship match. This chock slam would definitely made Wyatt to suffer not physically but mentally since he became the victim of Strowman’s anger in WWE’s new concept of ThunderDome.

These two will be facing each other for the third time this summer and this time in a catastrophic championship match. It was Bray Wyatt who stood tall over Strowman last time when both of them faced off against each other in a “Swamp Fight” at Extreme Rules.

But earlier in the show Braun Strowman made a huge statement this time he will break the shackles against “the fiend” and end his maniac once for all. Throughout this rivalry, Wyatt showed a little hand over “the monster among men” and this time it could be interesting when they meet each other at Summerslam to end this rivalry with a high-note.

— A “No Disqualification” match Sonya Deville vs Mandy Rose

IT’S OFFICIAL! @SonyaDevilleWWE will battle @WWE_MandyRose in a No Disqualification Loser Leaves WWE Match THIS SUNDAY at #SummerSlam! https://t.co/25tOMkJgvy pic.twitter.com/d8wAOkv973

WWE has further added a new kind of stipulation match for Sonya Deville and Mandy Rose that now this match would be “No Disqualification” match. Earlier this match was confirmed as “Hair vs Hair” match but WWE found it inappropriate since it may cost either of the superstars to go ‘bald’ or ‘shave off their head’ which would be embarrassing and insulting both. This Sunday both these harridans now face off in a “No Disqualification” match and the loser leaves WWE match.

It would a bizarre contest between these two old friends when they collide at the same time in ring at SummerSlam. But only one will stand tall against other. However, based on current performance it seems like Mandy Rose has the upper hand after what she had done to Sonya Deville two weeks ago on SmackDown Live.

When to watch WWE SummerSlam Live in India on TV?

WWE SummerSlam LIVE will telecast in India on Monday, 24th August 3:30 AM IST (kick-off) and Confirmed matches from 4:30 AM IST

What time will WWE SummerSlam LIVE be aired on TV?

WWE SummerSlam LIVE will be aired at 3:30 am next Monday Morning.

Where is WWE SummerSlam LIVE being held?

WWE SummerSlam LIVE will be held at Ambay Center, Florida.

How to watch WWE SummerSlam Live Online in India?

How to watch WWE SummerSlam LIVE in India on TV?

You can watch WWE SummerSlam LIVE in India on TV on Sony 1 for English commentary and Sony 3 for Hindi commentary. You can also follow insidesports.in for all the latest updates on WWE.

However, you can also enjoy WWE SummerSlam with virtual views and thrilling scenes at this SummerSlam by signing o the below with WWE ThunderDome to become the part of this astounding journey of SummerSlam.

#WWEThunderDome has reached maximum capacity for #SummerSlam this Sunday.

Stay tuned for your chance to register for virtual seats in the WWE ThunderDome at #WWERaw! https://t.co/DCxLHsPRxW

WWE SummerSlam 2020 Live in India: When and Where to watch it LIVE on TV and online

As per Indian timings, WWE SummerSlam 2020 Live will telecast in India on this Monday, August 24 at 3:30 am. It will be live and exclusive on Sony Ten 1 (English) and Sony Ten 3 (Hindi) channels. WWE SummerSlam 2020 live streaming will be available on the Sony LIV app.

You can follow all the WWE Raw, WWE Smackdown and upcoming WWE PPV latest updates, news and videos on insidesports.in