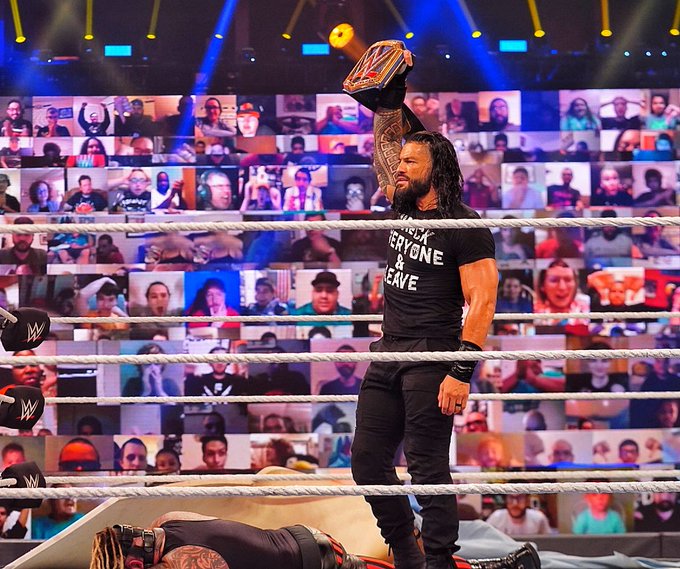 WWE SummerSlam results: Finally! Roman Reigns returned at SummerSlam 2020 to surprise the WWE Universe. We saw some thunderous matches in this latest event of WWE – SummerSlam. However, we have two new champions in this ThunderDome world. Four championships successfully retained at this flabbergasting event.

It was hell of a ride this SummerSlam it included everything such as chaos, excitement, destruction, annihilation, surprise and every little thing a WWE fan wanted to see.

However, may be one of the biggest return of the year. Yes, you heard it right. Roman Reigns returned in this latest mammoth event and took both Bray Wyatt and Braun Strowman as they never saw it coming.

The biggest party of the summer kicked-off with the United States Championship match between Apollo Crews and MVP. As it was announced earlier that other two members of ‘Hurt Business’ Shelton Benjamin and Bobby Lashley will be banned from ringside during this championship match. It was high-flying contest between these two superstars MVP was the one to took the momentum on his side. However, Crews still have the feeling during this match that other members of Hurt Business may cost him this match. It was pure chaos between these as this battle took place place for more than twenty minutes and it was Apollo Crews who retained his United States Championship successfully against MVP.

So finally it is time for SmackDown Women’s Champion Bayley up against ‘the Empress of Tomorrow’ Asuka. Bayley who was joined by Sasha Banks at ringside as always to help her in retaining her Championship. This match started with the little bragging of Bayley on Asuka, however, Asuka did not waste much time to take out Bayley outside the ring with the steel post. But Bayley as always with her spidey tangling sense and with the help of Banks at ringside tried to distract Auska. This match had everything high athleticism, nimble moves, submission maneuver and even close tackles. But it was Bayley who successfully retained her Championship against Asuka and this was her first win against Asuka in singles competition.

As recently we witnessed that The Street Profits became the only after four years to hold these titles for a long time. However, they stepped in the ring to take on Andrade & Angel Garza to successfully defend their Championships against them. It was hell of a match between these two teams initially it was the team of Andrade & Angel Garza who took the momentum on their sides by playing team up at ring post with Montez Ford and slamming him. Both the teams did everything to beat other but it was the big night nobody wanted to give so early. Meanwhile, it was a close but the power combination of the Street Profits made them successfully retained Their Tag Team Championships against Andrade & Angel Garza.

This match was one of the nastiest match of the night that took place between two old friends Mandy Rose vs Sonya Deville in a “No Disqualification” match and the loser leaves WWE match.

It did not took much time for Mandy Rose and made her way towards ring as she took out Sonya Deville outside the ring with a German suplex on the floor. It was a intense match as Deville made solid comeback in this match and tried to locked Rose in her arm lock. But at the last moment Rose took the advantage by covering up quickly which forced Deville to break this lock. It was not the end of this match as Rose carried out the tables and chairs outside the ring to break Deville in half. Finally, it was Mandy Rose who made Sonya Deville to tap out and she got the victory over Deville.

A much awaited match of the night as Dominik Mysterio took on Seth Rollins in a “Street Fight” which was also Dominik Mysterio’s debut match in WWE. Many believed that it would be a one sided match where Rollins will break Rey Mysterio’s son in half like him. But Dominik Mysterio’s high-flying moves and his mexican athleticism gave Rollins a strong competition in his match. Dominik took out the chairs in this match and slammed it on Rollins back and further brought a kendo stick and unleashed on Rollins. Dominik just putting the thunder on Rollins who seemed helpless throughout in this match Jr. Mysterio. Dominik was not done yet as he reached on the top of ring post along with Rollins and put him through on the table and gave Rollins every shot of this Street Fight.

But it was not enough for ‘Monday Night Messiah’ as he took the momentum on his side later on and tried to hand cuffed Dominik and gave him some hot shot outside the ring. At last it was the experience of Rollins who made him to got the victory over Dominik in this catastrophic match.

As earlier Bayley defeated Asuka and retained her SmackDown Women’s championship successfully. Now, it is time for Asuka to take to Sasha Banks for the RAW Women’s Championship. Once again as always now friend indeed Bayley joined Sasha Banks at ringside to help her like she did to her earlier. Asuka had not much in the tank after she lost her match earlier but she produced every inch of her strength to beat down Sasha Banks in this match. The powerbombs on the floor and striking on those steel post Banks did to quick off things early against Asuka. After a hell of fight Asuka made little comeback in this match but ‘the boss’ once again turned the things quickly on her side. However, Asuka decided not to give up so early as she locked Sasha Banks in Asuka lock which further made Banks to tap out and we have the New WWE Raw Women’s Champion.

One of the biggest match of the night. ‘The Viper’ Randy Orton took on ‘the Scottish Psychopath’ and the WWE Champion Drew McIntyre for the WWE RAW Championship. A colossal match between these two since neither of the superstars have lost a singles match since Wrestlemania 36. But after this match either one of them have to face the biggest defeat of the year. Orton did not waste much time to assault the champion outside the ring and put him through on the com box and made the early call. But the champion is not here for assault as McIntyre strike back on Orton and took the advantage against him by locking Orton in submission maneuver.

Moves after moves, tackles after tackles, both these superstars did their best to knocked out each other neither of them gave up so early. But at last it was the champion Drew McIntyre who got the emerged victorious over Randy Orton and continue his dominance on red brand.

The main event of the this SummerSlam took place between the two most destructive figures in WWE at the moment. Bray Wyatt faced off against Braun Strowman for the WWE Universal Championship match. This match started straight away outside the ring and both these “monsters” went on attacking each other with weapons and arsenals at ringside. Bray Wyatt took Braun Strowman while fighting at the backstage and produced a ‘Sister Abigail’ on the floor. However, it was not enough to beat the ‘monster among men’ who came out with a different mind set to end the maniac of Wyatt. It was a jaw-dropping battle between these two belligerents. Nevertheless at the last moment it was Bray Wyatt who produced and another lethal ‘Sister Abigail’ on Strowman and became the New WWE Universal Champion.

However, the biggest surprise of the night happened after the match when Roman Reigns, who shocked everyone with his return and produced two spears on Wyatt and Strowman and end the night with this major statement.