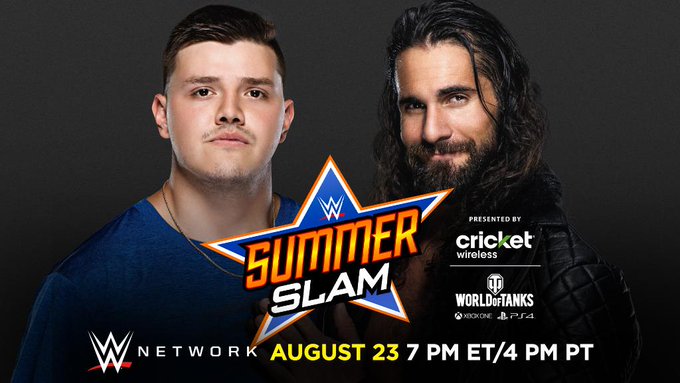 WWE SummerSlam 2020: It is official! Dominik Mysterio is all set to make his in-ring debut against Seth Rollins at Summerslam 2020. This match has become official after both these belligerents went into a brawl in the latest episode of WWE Raw. And Seth Rollins eagerly accepted the challenge of Dominik Mysterio to battle out with at SummerSlam 2020 and vowed to give Dominik the same taste what he has done to his father Rey Mysterio at Extreme Rules.

The ongoing rivalry between Seth Rollins and Mysterio’s once again set to get bigger at SummerSlam 2020, however, Dominik would be the underdog in this match but he won’t mind taking on Rollins and give him the same taste.

Dominik was the showrunner last week on RAW and also in this week’s RAW. He beat the hell out of Rollins and Co. Murphy with a kendo stick and asked for the match with Rollins which Seth Rollins accepted it.

For Dominik Mysterio it’s more than personal, it’s family. After the brutal conclusion to the Eye for an Eye Match at The Horror Show at WWE Extreme Rules, Seth Rollins‘ vicious attacks on Rey Mysterio finally reached a terrifying conclusion.

With the legendary luchador’s sight and career in jeopardy, his son Dominik was finally pushed too far and began his attempts to defend his father’s legacy and livelihood on his own.

As Murphy and Rollins repeated their attack on Aleister Black’s eye, Dominik literally came out swinging and scattered the sanctimonious duo with a Kendo stick attack. The following week, Rollins reprised a fervent sermon with Raw announcer Tom Phillips and awakened a challenge from the stoic Samoa Joe.

Will Dominik’s rage carry him to a win over the sadistic Superstar? Or will Rollins make the younger Mysterio suffer a similar fate to his father?