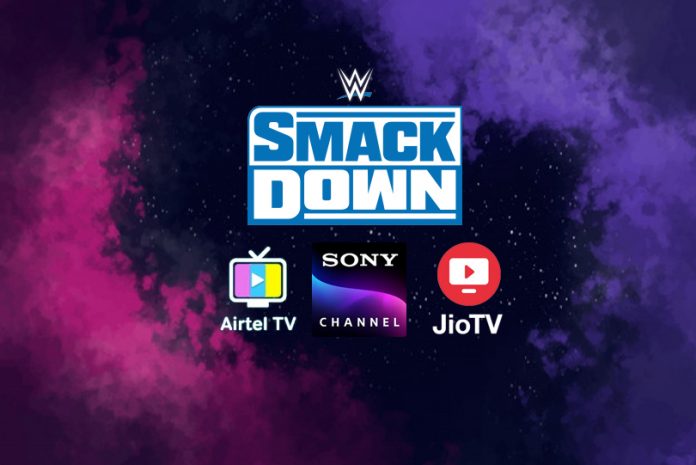 WWE SmackDown Live Streaming: We are all set to catch out another astounding episode of WWE Smackdown tonight. However, SmackDown has provided list of three colossal segments for today’s episode main event, or main matches, and we can also expect that it is going to be better than previous one.

Jeff Hardy to defend his Intercontinental Championship, Bayley will address WWE, Bray Wyatt to add newest member in his Firefly Fun House, and many more jaw-dropping segments will take place on tonight’s episode of SmackDown Live.

Not wasting further anytime let us check out some of the confirmed matches, predictions, timing, location and many more for this two hours chaos on blue brand.

You can watch WWE Smackdown LIVE in India on TV on Sony 1 for English commentary and Sony 3 for Hindi commentary. You can also follow insidesport.co for all the latest updates on WWE.

Confirmed matches and Some of predictions from tonight’s SmackDown Live episode so far.

Hardy reclaimed the workhouse championship in a gritty win over The Phenomenal One, but the outspoken Superstar has been crying foul ever since Hardy’s dramatic triumph. The reemergence of Zayn threw another wrench into the title picture, as The Great Liberator has staked claim to the championship as well. The three competitors brawled inside the squared circle last week on SmackDown, and it was Zayn who walked up the ramp with a wry smile after delivering a Helluva Kick to Hardy.

.@JEFFHARDYBRAND and @AJStylesOrg are set for an #ICTitle showdown TOMORROW NIGHT on #SmackDown!

Nothing gold can stay.@itsBayleyWWE addresses her vicious attack on @SashaBanksWWE tomorrow night on #SmackDown.

WWE Universe witnessed last week on SmackDown a glimpse of a new superstar, who made its way to the squared circle. Following this snippet, it is also revealed this new superstar wanted to align with “the Fiend” Bray Wyatt at Firefly Fun House. Nevertheless, the rumors suggest that Wyatt could unveil a new puppet, but there is also speculation that it could have something to do with Alexa Bliss and her ongoing character transformation.

The #FireflyFunHouse gets a new addition as @WWEBrayWyatt unveils a new creation tomorrow night on #SmackDown!

As per Indian timings, WWE Smackdown Live telecast in India on every Saturday, September 12 at 5:30 Am Live from Amway Center, Orlando. It will be live and exclusive on Sony Ten 1 (English) and Sony Ten 3 (Hindi) channels. WWE Payback 2020 live streaming will be available on the Sony LIV app.