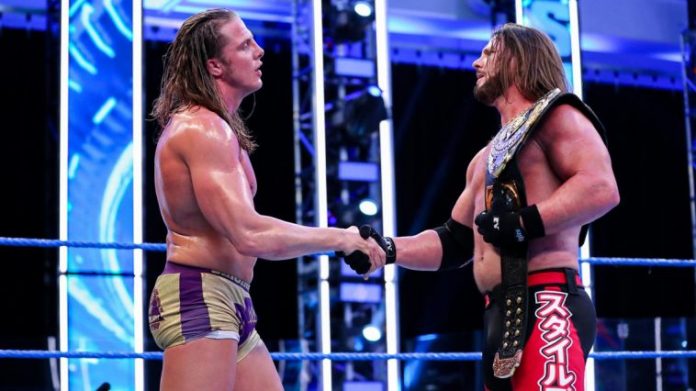 WWE SmackDown : This week’s Friday night SmackDown Live kicked off with a bamboozled contest between the New Day’s Big E up against Cesaro in a one on one match. And the interesting part about this match was that, winner had the opportunity to choose the stipulation match as ‘tables match’ or ‘steel cage match’ for their official match at Extreme Rules for the Smackdown Tag Team Championship.

And on the other side we had the special guest for Alexa Bliss and her Co. Nikki Cross talk show “A moment of Bliss”. But Bliss was shortly interrupted by the SmackDown Women’s Tag Team Champion Bayley & Sasha Banks. However the special guest was RAW Women’s champion Asuka, and all five divas in the ring got into a brawl and later on, we had tag team action between the team of Champions Bayley and Sasha Bank up against Nikki Cross and Asuka.

Here are all the highlights from WWE Smackdown Live July 17, 2020:

It was a high-flying action match which took place between The New Day’s Big E and Cesaro in one on one. And there was condition in this match and that was winner of this match had the opportunity to choose stipulation match as they want for their official match at Extreme Rules. And it was Cesaro who got the victory over Big E with the help of Nakamura. And later, Cesaro and Nakamura chose the stipulation match as ‘tables match’ for the Smackdown Tag Team Championship this Sunday against The New Day.

The main event of the night was the Intercontinental Championship between Matt Riddle and AJ Styles. It was a nail-biting contest which almost took place for half hour and it was AJ Styles who retained its Intercontinental Championship successfully again. And after the match it was Baron Corbin who attacked Matt Riddle from behind and made the statement before the Extreme Rules. Now there are changes that Matt Riddle will face off against Baron Corbin this Sunday at Extreme Rules in one on one contest.