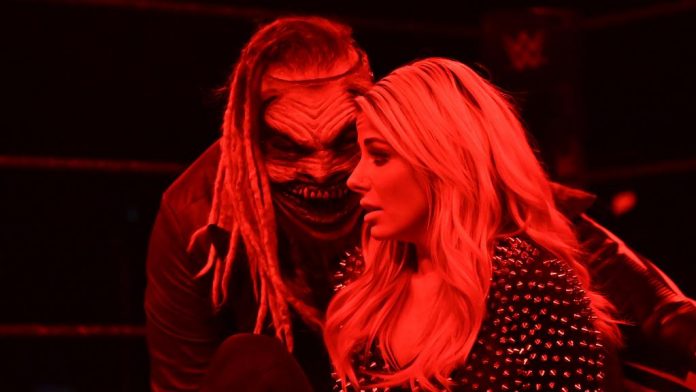 WWE Smackdown Live results : The latest episode of SmackDown Live commenced with a massive Intercontinental Championship clash between the champion AJ Styles and the challenger Gran Metalik. This opening contest was full of action-packed as both these belligerent did their best to defeat each other, however, it was ‘the Phenomenal One’ AJ Styles who retained his Intercontinental Championship successfully.

Following this astounding segment, at backstage, we had King Corbin who was joined by Chad Gable and Corbin was trying to agitate Chad Gable to join hand with him. And later on Chad Gable and King Corbin left the arena with a smile on their face and with a astonishing message “money talks.”

At the main event of the night we had the colossal battle between SmackDown Women’s Champion Bayley and the challenger Nikki Cross.

Here are all the highlights from WWE Smackdown Live August 1, 2020:

The lastest episode of SmackDown Live kicked off with this massive encounter between AJ Styles and Gran Metalik for the Intercontinental Championship. It was flabbergasting contest between both these belligerent who did everything to beat each other. However, this championship contest lasted for more than twenty minutes and at last it was the champion AJ Styles who emerged victorious over Gran Metalik in this high-flying battle. With this amazing win AJ Styles successfully retained his Intercontinental Championship against Drew Gulak, Matt Riddle, and most recently Gran Metalik. Styles has once proved that why he is called ‘the Phenomenal One.’

Jeff Hardy marked his ways towards the ring side for his stunning victory over Sheamus last week on SmackDown Live. Jeff Hardy crushed the Sheamus in’ A Bar Fight’ and took the avenge from Sheamus, as Hardy barley spoke what does this victory means to him, however, he was interrupted by King Corbin, who came out with a plan to take on Jeff Hardy. But later on it Baron Corbin who took on Drew Gulak in a singles competition.

King Corbin took on against Drew Gulak after he spoiled Jeff Hardy’s victory celebration. Drew Gulak was the favourite one to beat King Corbin in this match, both these superstars gave their hundred percent to get the victory but non of them manage to do so. Since King Corbin was distracted by Matt Riddle, who was also looking to take his revenge from King Corbin. Matt Riddle entered in the ring while Gulak and Baron were battling and he attacked Corbin from behind as a result of it match official rung the bell with no winner. Nonetheless Matt Riddle also got attacked from behind by Chad Gable who promised Corbin at backstage that he will come and rescue him and he did so.

At backstage, Mandy Rose was getting ready to make her mark towards ring side but she did not that a terrible incident was waiting for her. Mandy Rose’s old friend now her rival Sonya Deville came from no where and assaulted Mandy Rose from behind and chopped Mandy Rose’s hair. And this major statement might turned into a brutal one in the following segments since Mandy Rose will not remain silent after what Sonya Deville had done to her.

Naomi was ready to take her revenge from with Lacey Evans in this latest episode of SmackDown Live. This contest was more about pride for Naomi to earn the respect which she has lost in a while. It was Lacey Evans who took the momentum on her side initially with the starting of this match. But later on Naomi held her nerves and defeated Lacey Evans in this high profile match. With this win Naomi showed the WWE Universe why she deserves a better opportunity in WWE.

“The Fiend” just returned on this latest episode of SmackDown Live and made a huge statement. Bray Wyatt last week also brought back his Firefly Fun House adventure, but this time it was no fun it was pure chaos and destruction. Alexa Bliss who got the first taste of fiend unleashing in this lastest episode of SmackDown Live. As she was in the ring and the dark eyes of Bray Wyatt took her to deep down with him.

The main event of the night took place between the SmackDown Women’s Champion Bayley and the challenger Nikki Cross for a championship match. Bayley was joined by Sasha Banks at ringside to help Bayley retaining her title. This battle was almost the recap of their Extreme Rules match. Nikki Cross showed her athleticism and strength in this match to defeat Bayley but she fell little short to beat the Champion. It was Bayley who defeated Nikki Cross once again in this thunderous and catastrophic match. With this win Bayley once again retained her Women’s Championship successfully and her dominance on blue brand is still continue on.