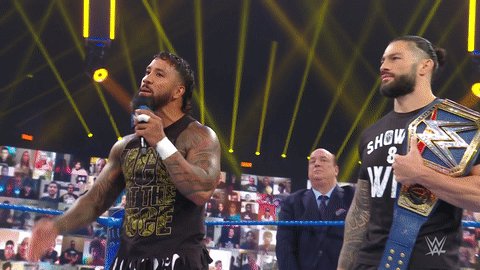 WWE SmackDown Live Results: The latest episode of SmackDown Live kicked off with a tribute image of the 9/11 terror attack. However, the main course of action began with the WWE Universal Championship Roman Reigns, who marked his way towards the ring with Paul Heyman.

Paul Heyman started things with a little bragging of Champion Reigns until he was interrupted by Roman Reigns’ Championship challenger Jey Uso. Following this cousins’ revelation later they were set up against Sheamus and Baron Corbin in a Tag Team match.

However, on the another segment we had Intercontinental Championship match that took place between AJ Styles and Jeff Hardy where Sami Zayn was also keeping his eyes on that match.

Bayley after attacking her friend Sasha Banks was set all to address WWE Universe for her heinous attack on Banks.

The challenge has been laid down!!! ?

The latest episode of SmackDown Live kicked off with a tribute image of the 9/11 terror attack. However, the main course of action began with the WWE Universal Championship Roman Reigns, who marked his way towards the ring with Paul Heyman. Paul Heyman started things with a little bragging of Champion Reigns until he was interrupted by Roman Reigns’ Championship challenger Jey Uso. Following this Uso says, he is proud of him, what he has achieved week on SmackDown, until he was interrupted by Sheamus and Baron Corbin, after heated chitchat – – Jey Uso and Roman Reigns set up to face of against Sheamus and Baron Corbin in a Tag Team match.

.@AJStylesOrg doesn’t care how he has to get it done… he’s out to prove that HE is the true Intercontinental Champion.#SmackDown #ICTitle @JEFFHARDYBRAND @SamiZayn pic.twitter.com/RBeGI2gmbm

In the ring, AJ attacks Jeff as the referee pulls AJ away. The bell rings and we are under way. AJ runs towards Jeff but Jeff moves out of the way. Jeff with the Twist of Fate. he climbs the top rope but misses the Swanton Bomb.

Cesaro and Metalik start the match. Metalik runs to the ropes and an acrobatic move brings Cesaro down. Metalik jumps off the second rope and a hurricanrana. Kalisto is tagged in and they double team Cesaro. He goes for the cover but Cesaro kicks out. Kalisto is about to run to the ropes but Nakamura distracts him and Cesaro knocks Kalisto down. Cesaro is tagged in as they double team him. Nakamura knocks Metalik off the ring apron. Cesaro goes for the cover but Kalisto kicks out.

Despite being attacked by @itsBayleyWWE, @NikkiCrossWWE wants to compete in this Fatal 4-Way Match determine the No. 1 Contender to the #SmackDown Women’s Title!@AlexaBliss_WWE @LaceyEvansWWE @TaminaSnuka pic.twitter.com/8nT3HkQ4Id

WWE SmackDown Women’s Champion Bayley makes her way down to the ring holding a steel chair. Bayley sits on the chair in the middle of the ring and leans forward. She points at the big screen as we see the clip of last week’s attack including clips from PayBack and SummerSlam.

Bayley says after all that, everyone is asking how Sasha Banks is. Is she feeling better, when she will be back. No one is asking how Bayley is doing, no one is asking how she feels? Do you think it makes me feel good to take that steel chair and destroy my best friend? Well ding dong, yes I did, I loved every single second of it, Bayley says. She says everyone wants answers. Michael Cole wants to know. They want answers, she is full of questions.

The bell rings and we are under way. Tamina throws Cross to the outside and Lacey goes after Alexa. Tamina big boots Alexa to the outside. Lacey trips Tamina up. She goes for a right hand but a headbutt by Tamina. In comes Bliss who dropkicks them both down. Alexa with a right hand and a kick taking Lacey and Tamina down.

Nikki bounces Evans off the top rope and lands a neck breaker. Evans rolls to the outside of the ring. Tamina goes for a super kick, Nikki counters it into a sunset flip and she gets the pin.

Miz gets on the ring apron as Tucker runs towards Miz. Otis runs towards Morrison but he lands face first. Tucker throws the small lunch box with the contract over to Miz as Miz runs to the back. Otis knocks Morrison down and he hits him with the caterpillar. Otis jumps off the second rope with a big splash. He goes for the cover and gets the pin.

Say ? to the newest addition to the #FireflyFunHouse …

Bray has decorations set up inside and he says there’s something he’s been meaning to say. Thanks to Roman Reigns, something very special is missing from the Fun House. But everyone experiences loss. How you handle loss defines the person that you become. Wyatt goes to a box and says inside is the newest member of the FireFly Fun House. He has overcome so much in his life to make it this far. Please welcome Pasqual the Persevering Parrot. Wyatt opens the box and he tells the Parrot to fly out and say something inspirational.

Wyatt gets angry as he looks at the box and says he probably should have cut some holes in the box. Wyatt throws the box away as the door opens and it’s the mannequin Vince McMahon. He tells Wyatt he has lost the Universal title, he lost the parrot and he lost his trust. He can’t handle the responsibility of the Fun House on his own. Bray asks what he has in mind as Vince welcomes the new special advisor and it’s a walrus and he says his name is Wobbly Walrus. Wyatt looks at the both and says yowie wowi. Vince says this is such good shit.

After Jey @WWEUsos had to start off their tag team match solo, @WWERomanReigns arrives to even the odds with a timely assist. #SmackDown pic.twitter.com/MUZrhXwkKo

With both Corbin and Sheamus in the ring, out comes Jey Uso as they attack him. The bell rings with Roman Reigns not out.

Jey and Corbin in the ring as Jey hits him with a kick toe the body. He runs to the ropes as Sheamus trips him up and Corbin hits him with the Deep Six. He goes for the cover as Jey kicks out. Sheamus is tagged in as they double team him. Sheamus slams Jey down onto the mat and Corbin is tagged in. He gets Jey in the corner and stomps on him. Corbin climbs the top rope and goes for a kick but Jey moves out of the way.

WWE Raw Monday Night Raw results : The Archer of Infamy- Damian Priest made a shocking return from injury this week on WWE Raw

WWE NXT Takeover Results: Karrion Kross too strong to hold on his NXT Championship in the main event of the night