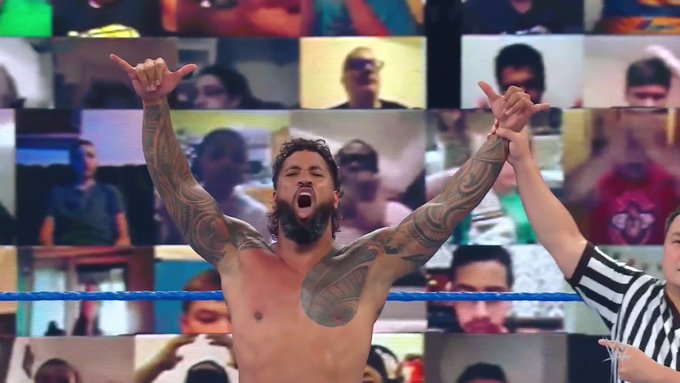 WWE SmackDown Live Results: It happened all here in this latest episode of WWE Smackdown Live – – Bayley finally turned heel against her best friend Sasha Banks. Jey Uso also got the biggest opportunity of his life to face WWE Universal Champion at Clash of Champions 2020. There were many more surprising segments that happened in this latest episode of SmackDown Live.

However, WWE SmackDown kicks off with clips of last Sunday’s Universal Championship match from Payback with Roman Reigns as the new Champion.

Live in the ThunderDome, it’s the new WWE Universal Champion Roman Reigns along with Paul Heyman. They take their time to get to the ring as Heyman says: It is Roman Reigns time to unleash show it is his yard.

However, we had a Fatal-4-way match for tonight’s show to determine Roman Reigns’Universal Championship at Clash of Champions 2020. Apart from that we also had WWE Women’s Tag Team Championship match between Nia Jax & Shyana Baszler vs Bayley & Sasha Banks.

Meanwhile we saw the return of Jey Uso  who welcomes back Roman Reigns backstage as Reigns tells Heyman to leave. They ask him what he’s doing with Heyman. He says he has it under control and to let him handle it. Roman says he loves him and he has to leave.

Heyman says The Fiend does Fiendish things. A Monster does Monster things. Imagine turning on Fox and you see Strowman. He says Roman as Champion has always been defined on what WWE was built on. Family, legacy, the accountability of owning one’s champions as the champion. And on Raw, they have a challenge to see who will challenge for Clash at Champions. Raw did a triple threat but SmackDown will do a fatal four way tonight. Paul says he will let the names of the four gentlemen be hyped by Anderson Cooper and Carmella’s boyfriend as they don;t deserve to say their names. Heyman says his name is Paul Heyman and he serves as special council to the tribal chief, your Reigning, defending undisputed, Heavyweight Champion, Roman Reign.

Roman says he is a man of his word. He did what he said he would do. He wrecked the Fiend, The Monster and left as the Universal Heavyweight Champion. He says this is his island and he doesn’t care who he faces at Clash of Champions. He says when you have his power, all you have to do is show up and win. Believe that. He drops the mic and they leave.

The bell rings and we are under way. The Miz is in with Otis and Otis drops Miz down. A back elbow by Mizz and right hands by Miz but a shoulder tackle by Otis as Tucker is tagaed in.Tucker goes for the cover but Miz kicks out. A jaw breaker by Miz and Morrison is tagged in.

A single leg take down by Tucker followed by a hip toss. A splash by Tucker and Otis is in. A double team onto Morrison. In comes The Miz and Heavy Machinery clean house. Miz and Morrison double team Tucker but Otis is tagged in. He cleans house and drops Morrison down. Miz attacks Otis as they double team him. Morrison goes for the cover but he kicks out. Miz is tagged in. Morrison still in the ring as Otis goes for the tag but Tucker is taken down off the ring apron. Miz attacks Otis but Otis is fired up. He grabs Miz and throws him across the ring. In comes Morrison and he is tossed around. Otis with a big splash on both men. Otis with the caterpillar on Miz. Otis on the second rope with a big splash on Miz. He goes for the cover and gets the win.

Big E is backstage with Gulak and Lucha House Party. He says Woods is back to host Talking Smack but it’s also his birthday. There’s a birthday cake on the table. Big E says when he wins the four way match, he will cash in his golden ticket for the Universal Championship Match against Roman Reigns. In comes security who tells Big E that Woods is in the building. Big E grabs the cake but it’s Sheamus who attacks him and hits him with the Brogue Kick. Sheamus lifts Big E up on top of a car and slams him onto the windshield.

Jax gets Sasha up on her shoulders. She climbs to the second rope, in comes Bayley who drops Jax. Shayna gets in and she’s double teamed. Jax off the second rope with a cross body on Bayley and Banks. She goes for the cover and gets the pin.

Bayley throws Sasha back in the ring and stomps on her. Bayley slams Sasha into the mat. Bayley yells at Michael Cole and asks him if it’s boss time. Bayley tells Sasha she deserves all of this and attacks Sasha’s bad leg. She grabs a chair and gets back into the ring. Banks kicks Bayley away but Bayley hits her with a knee to the face. Bayley places Sasha’s head in between the chair and climbs the second rope. She jumps off and lands on the chair.

We see a clip of last Friday’s SmackDown where Sami Zayn attacked Jeff Hardy on the stage. Back in the ring, Sami asked Craig Hamilton what kind of introduction that was as he was holding the Intercontinental Championship and he wasn’t addressed as the Champion. Craig says it wasn’t in his notes. Sami tells him to come over and asks who is in charge. He grabs the headset and talks to Marty from production. He asks him if Intercontinental Champion was included in his graphic during his entrance.

Sami says they will review the entrance as Jeff Hardy’s music hits. Out he comes with the Intercontinental Championship. He tells Sami if he wanted a match for the title, all he had to do was ask. Sami says it’s generous of him but confusing as he is the champion. If anything, Jeff should ask him for a match. The two argue and out comes AJ Styles to the ring.

AJ asks how they could parade around with the titles knowing that he is the uncrowned Intercontinental Champion. Sami asks what is going on. Jeff says he is ready to defend his title anytime. Styles attacks Jeff and as does Zayn. Styles attacks Sami and Jeff hits the Twist of Fate on Styles. He goes for Sami but Sami hits him with the Helluva Kick. He grabs his Intercontinental Championship and runs off.

Jey runs to the ropes but Corbin drags him to the outside and throws him into the barricade. A back breaker by Sheamus onto Riddle. He goes for the cover but Riddle kicks out. Sheamus in the ring as he an Corbin double team Riddle. Corbin knocks Jey off the ring apron. Riddle throws Sheamus to the outside and a spinebuster by Corbin. In comes Uso and he knocks him down. He goes for the cover but Jey kicks out.

Corbin throws Riddle back into the ring. Corbin goes for End of Days, Sheamus with the Brogue Kick onto Corbin, Riddle iwth the Bro to Sleep on Sheamus. Riddle climbs the top rope and the Floating Bro on Corbin. Jey with the frog splash onto Riddle. He goes for the cover and gets the pin.