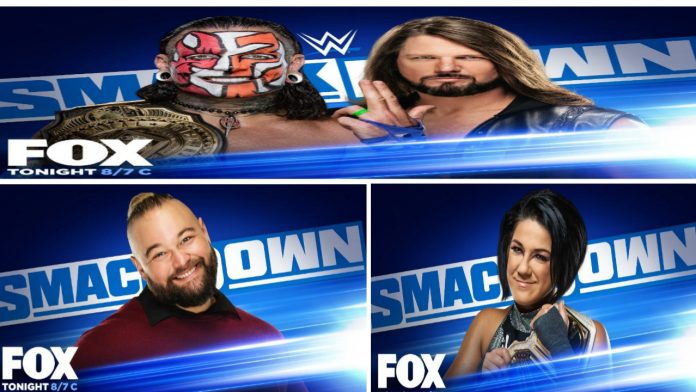 WWE SmackDown Live: WWE Clash of Champions 2020 is on its way, and we are just fortnight from that mammoth event. This PPV has already two thunderous segments, and we may expect many more jaw-dropping segments will add soon from tonight’s episode of SmackDown Live.

However, We are all set to catch out another astounding episode of WWE Smackdown tonight. However, SmackDown has provided list of three colossal segments for today’s episode main event, or main matches, and we can also expect that it is going to be better than previous one.

Jeff Hardy to defend his Intercontinental Championship, Bayley will address WWE, Bray Wyatt to add newest member in his Firefly Fun House, and many more jaw-dropping segments will take place on tonight’s episode of SmackDown Live.

Not wasting further anytime let us check out some of the confirmed matches, predictions, timing, location and many more for this two hours chaos on blue brand.

Confirmed matches and Some of predictions from tonight’s SmackDown Live episode so far.

Hardy reclaimed the workhouse championship in a gritty win over The Phenomenal One, but the outspoken Superstar has been crying foul ever since Hardy’s dramatic triumph. The reemergence of Zayn threw another wrench into the title picture, as The Great Liberator has staked claim to the championship as well. The three competitors brawled inside the squared circle last week on SmackDown, and it was Zayn who walked up the ramp with a wry smile after delivering a Helluva Kick to Hardy.

.@JEFFHARDYBRAND and @AJStylesOrg are set for an #ICTitle showdown TOMORROW NIGHT on #SmackDown!

Nothing gold can stay.@itsBayleyWWE addresses her vicious attack on @SashaBanksWWE tomorrow night on #SmackDown.

WWE Universe witnessed last week on SmackDown a glimpse of a new superstar, who made its way to the squared circle. Following this snippet, it is also revealed this new superstar wanted to align with “the Fiend” Bray Wyatt at Firefly Fun House. Nevertheless, the rumors suggest that Wyatt could unveil a new puppet, but there is also speculation that it could have something to do with Alexa Bliss and her ongoing character transformation.

The #FireflyFunHouse gets a new addition as @WWEBrayWyatt unveils a new creation tomorrow night on #SmackDown!

The current SmackDown Tag Team Champions Cesaro & Shinsuke Nakamura successfully defended their Tag Team titles two weeks ago on WWE ThunderDome in SmackDown Live. They defeated Lucha House Party in a catastrophic and high-flying contest and retained their Championships in first reign. However, it will be interesting to see who will stop these new alliance of Cesaro and Nakamura ahead of Clash of Champions 2020. Moreover, Cesaro and Nakamura challenged RAW Tag Team Champions ‘The Street Profits’ next week on RAW, but it will curious to see who will challenge them before that.

Mandy Rose who did not perform in main roster since she won a mammoth match over her old friend Sonya Deville at SummerSlam 2020. However, there are chances that Rose may challenge Bayley for the Smackdown Women’s Champion at Clash of Champions 2020, and things may proceed from tonight’s episode of SmackDown Live. It will be interesting to see what Mandy Rose holds for this tonight’s segment on SmackDown.

Sami Zayn surprised everyone two weeks ago on SmackDown when he made his return to WWE after two months of sudden hiatus. Zayn did not waste much time, and anomaly produced a cheap shot on Jeff Hardy’s face on the very same night. After new Intercontinental Champion Jeff Hardy successfully defended his Intercontinental Championship against Shinsuke Nakamura on SmackDown.

However, it will be interesting to catch out whether this championship match between Styles and Hardy will complete without any interference tonight, or Zayn will make his presence felt once again.

Nobody saw it coming! Last week on Friday Night SmackDown WWE Universe illustrated with a blistering win of Jey Uso in a Fatal-4-way match to determine Roman Reigns’ Universal Championship at Clash of Champions 2020. Initially, this Fatal-4-way was placed between Matt Riddle, King Corbin, Sheamus, and Big E but E failed to perform in this Fatal-4-way match after Sheamus’ brutal attack at backstage on him, and Big E was replaced by Jey Uso later in the match.

Jey Uso grabbed this opportunity from both hands to became #1 contender for WWE Universal Championship, and now he is all set to challenge his cousin Roman Reigns at this event for the WWE Universal Championship match. It will be interesting to see what Uso holds for tonight’s episode whether he will call out his cousin Reigns in the ring or Big dog has some other plans.

As per Indian timings, WWE Smackdown Live telecast in India on every Saturday, September 12 at 5:30 Am Live from Amway Center, Orlando. It will be live and exclusive on Sony Ten 1 (English) and Sony Ten 3 (Hindi) channels. WWE Payback 2020 live streaming will be available on the Sony LIV app.