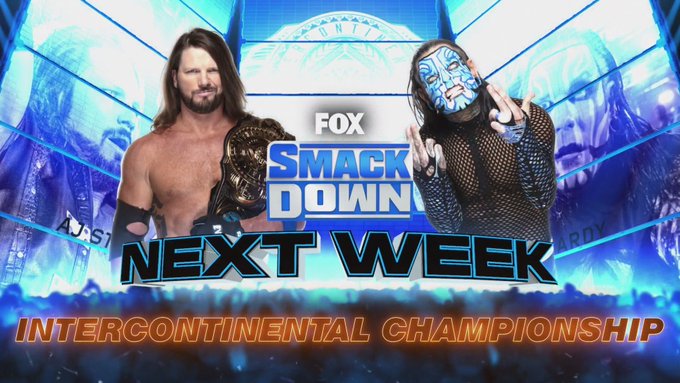 This colossal match announced after the latest episode of SmackDown Live when AJ Styles was in the ring and he said he created a statistical system to determine who should challenge for his title. Unveiling a whiteboard that showed only his own name and saying no one had earned the right to face him for the title. Jeff Hardy then interrupted the promo and pointed out that Sheamus robbed his chance in the intercontinental championship tournament, but that was the past and he would let it go.

Jeff Hardy then challenge the AJ Styles for championship match which Styles hesitantly said no on initially, but after he trolled Hardy for being a fake superstar which led Hardy to put some show on  Styles. And as a result of it Styles then admittedly accepted the challenge of Jeff Hardy to defend his title against him.

That clear things up for you, @AJStylesOrg?@JEFFHARDYBRAND wants to be the next challenger for the #ICTitle!#SmackDown ? @FOXTV pic.twitter.com/CdkP3MCxRT

This could be a thunderous match before WWE’s next biggest event SummerSlam, however, AJ Styles has already successfully defended his Intercontinental Championship against the likes Drew Gulak, Matt Riddle, and recently against Gran Metalik on SmackDown Live.

So, it will interesting to see whether Styles will successfully defend his Championship against Hardy or Hardy will add one more championship in his account.