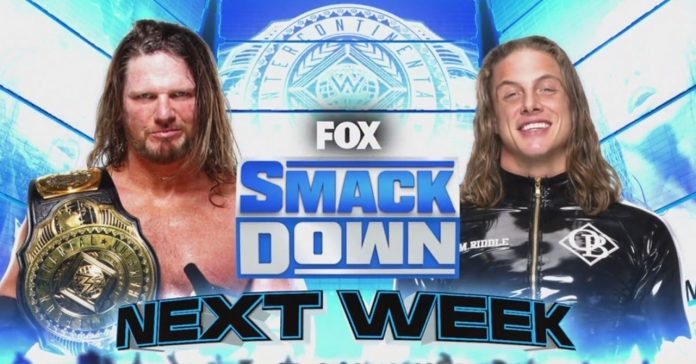 WWE Smackdown Preview: WWE has made it official that next week on SmackDown Live there will be an Intercontinental Championship title match. The current champion AJ Styles will defend his Intercontinental Championship against Matt Riddle. During today’s SmackDown segment AJ Styles announced it on backstage that he is all set to defend his title before The Horror Show at Extreme Rules.

AJ Styles who had successfully defended his Intercontinental Championship against Drew Gulak last week on SmackDown in a roller-coaster match. And proved the WWE Universe why he is called ‘the Phenomenal one’. Styles does not mind to defend his title again, but this time against the newcomer Matt Riddle who had already beaten Styles last month in a non-title match with his sensational performance and left the Styles Shocked in his very first match on the blue brand.

Moreover, this could be the turning moment in Matt Riddle’s wrestling career if he defeats the Styles again and wins the Intercontinental Championship. But Styles does not take the Riddle very readily this time as he knows if he does so this time, may lose the title. It will be exciting to watch whether AJ Styles continues his Phenomenal performance on blue brand or will it be Matt Riddle who shocks the Styles once again and gets the glory and makes the history.