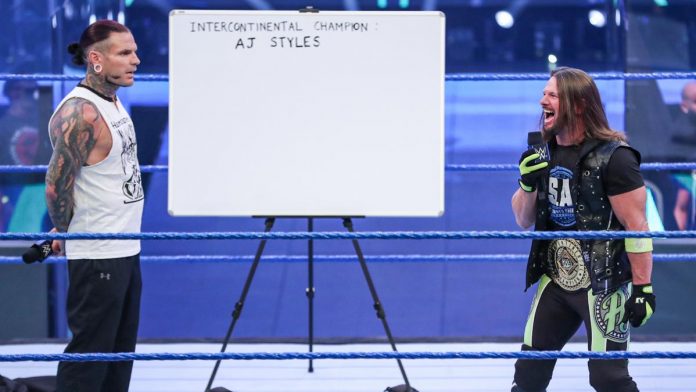 Friday Night SmackDown Live will take place first time at Amway Center, Orlando almost after five months of COVID-19 pandemic halt. It will be astounding to watch how this week’s SmackDown Live will go since fans are also too exciting for the ThunderDome idea and virtual meet plan with WWE superstars.

However saying this, let us check out the two championship matches that will take place a night before SummerSlam.

Spoiler: This match is going to be GOOD!@AJStylesOrg defends his #ICTitle against @JEFFHARDYBRAND NEXT FRIDAY on #SmackDown at 8/7c on @FOXTV! pic.twitter.com/6GImkvhMiV

So, it will interesting to see whether Styles will successfully defend his Championship against Hardy or Hardy will add one more championship in his account. All this will happen on WWE ThunderDome.

Is the “Champion’s Lounge” about to be shut down?#LuchaHouseParty take on @ShinsukeN & @WWECesaro for the #SmackDown Tag Team Titles tomorrow night.

The current SmackDown Tag Team Champions Cesaro & Shinsuke Nakamura will defend their Tag Team titles against Lucha House Party this week on SmackDown just before a couple of days at SummerSlam. This match is going to be full of chaos when these two teams will be in the ring this week on SmackDown Live for the championship match. This week’s Friday is also set to take place on the new venue at Amway Center, Orlando. It is also exciting to know this week’s SmackDown Live will unveil the immense concept of WWE “ThunderDome” which will begin with championship match.

Will Lucha House Party finally get their hands on the titles? Or will Nakamura & Cesaro be toasting another victory?