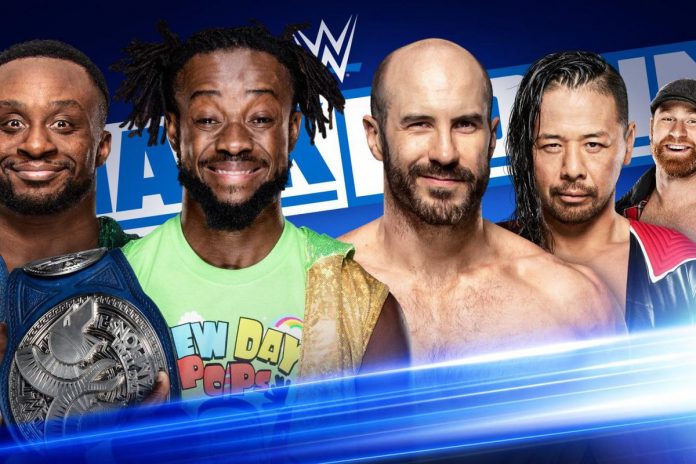 WWE News: WWE As things start getting serious at WWE, this week’s WWE Smackdown is expected to drop some more Extreme Rules match cards. One of the interesting segments from this week’s WWE Smackdown is the tag team championship match between the New Day and the team of Cesaro and Nakamura. In another segment, Jeff Hardy will be the special guest on MizTV segment. Meanwhile, newcomer Matt Riddle is expected to surprise the WWE Universe once again. There are many more fabulous segments in this two hours episode.

WWE Smackdown LIVE is aired at 6:30 am every Saturday.

You can watch WWE Smackdown LIVE in India on TV on Sony 1 for English commentary and Sony 3 for Hindi commentary. You can also follow WrestlingTV for all the latest updates on WWE.

The power of positivity will lock horns with cynical skills when the champions defend their Smackdown Tag Team titles against Cesaro and Nakamura. Last week, Nakamura had scored a victory over Kofi Kingston which was more like a statement for the tag team champions. The two bitter Superstars have used every possible opportunity to target the eight-time champions with blindside attacks, as the duo has searched for the respect they believe they deserve. Will the decorated tag team titleholders fight off the challenge and retain their gold? Can Nakamura & Cesaro earn the esteem they crave by taking the titles?

The Golden Role Models have established their dominance, but that does not mean their rivals are ready to accept it. As tensions remain at an all-time high, Sasha Banks & Bayley will face Alexa Bliss & Nikki Cross in a non-title clash. Cross has kept the Smackdown women’s champion on her toes ahead of their title clash at The Horror Show at Extreme Rules. The unpredictable superstar jumped in from all angles to distract Bayley in her Champion vs Champion match against Asuka. The challengers also derailed The Golden Role Models’ tribute to themselves last week on SmackDown, but the ensuing match between Five Feet of Fury and Bayley ended in a disqualification after Cross’ emotions boiled over. Will the erratic Cross keep her emotions in check to send a message ahead of her title showdown? Or will Bayley & Banks back up their boasts as the gold standard?

WWE Smackdown match: Reair of Braun Strowman vs Bray Wyatt at Money in the Bank

It has been a long and twisted road which has led the Smackdown Men’s champion Strowman and Wyatt back to the Swamp. On Smackdown this week, fans can catch the most recent in-ring chapter with a special presentation of the Universal Championship Match from WWE Money in the Bank.

Wyatt looked to reawaken Strowman’s past after The Monster Among Men reached the championship summit at WrestleMania 36. Relive the epic clash of mind games between the familiar foes with a special presentation of the match.