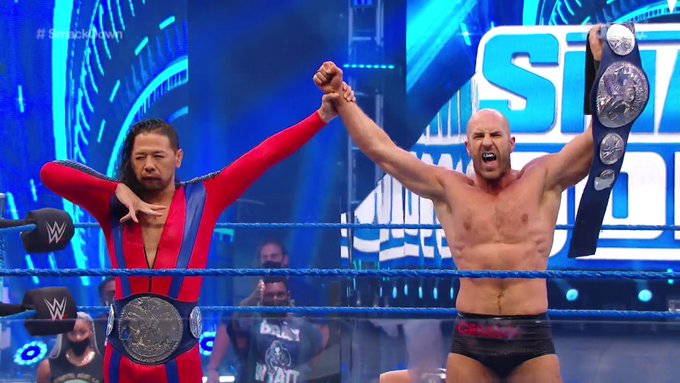 WWE SmackDown Results: The latest episode of SmackDown ended in a destructive way when the new team “RETRIBUTION” decided to bring the chaos on the blue brand. As they also did the same on last week on Monday Night RAW.

Apart from this destruction, some surprises were waiting for “the Golden Role Models” Sasha Banks and Bayley, when Stephanie McMahon announced a colossal match for next week’s SmackDown Live to determine Bayley’s Championship at SummerSlam. The Miz and John Morrison also shown in action almost after a month in a Tag Team match when they faced off against the team of Otis & Tucker which ended in no result following some bizarre circumstances.

This two-hours of SmackDown involved everything such as excitement, giving opportunities to new talents, annihilation and surprise.

Moreover, let us check out the top 5 moments from this week’s Blue Brand.

Matt Riddle set up against in a singles competition against Sheamus in this latest episode of SmackDown Live. It was a solid competition from both side as Sheamus used all his experience and skills against Matt Riddle in this match. Matt Riddle once again impressed WWE Universe with this match by his high-flying athleticism inside the ring and outside the ring and almost nailed down Sheamus in this flabbergasting contest. However, it was Chad Gable, who intervene in this interesting competition and took out Riddle from behind. As a result of it match official rung the bell and announced Matt Riddle as the winner by no DQ rules. Meanwhile, Sheamus was in the angry mood after all that he decided to put up some show against Chad Gable for his actions.

The current SmackDown Tag Team Champions Cesaro and Shinsuke Nakamura also marked their way to ring for their new opponents on SmackDown. It was Cesaro who went up one on one against Lince Dorado. This was the first time when Cesaro was set up an in-ring action after he and Nakamura won the championships at Extreme Rules. It was pure dominance from one-half of the Tag Team champion Cesaro who did not even give a single chance to Dorado and strike back in this match. At last, it was Cesaro who emerged victorious over Lince Dorado in this one-sided competition.

Bray Wyatt “Firefly Fun House” once again brought the fun segment back to SmackDown after his last week maniac when he attacked Alexa Bliss by unleashing “the fiend.” However, In this latest episode of SmackDown Live “the fiend” marked its way to the ring with a message for his arch-rival Braun Strowman. But before that Bray Wyatt was joined by Alexa Bliss in the ring, not very far, Braun Strowman on big screen warned Bray Wyatt that he made a huge mistake by trying to play with Strowman’s emotions. Braun Strowman further added that he is ready to face the fear of “the fiend” at SummerSlam and this time Bray Wyatt will regret to face “the monster among men.”

“The Golden Role Models” Sasha Banks and Bayley both were in the ring for this latest episode of WWE Smackdown Live. As both Bayley and Sasha Banks had informed that there will be a video conference call from Stephanie McMahon, who was holding a surprise for both the Champions. McMahon announced that a triple-brand battle royal would take place next week, with the winner challenging Bayley for the SmackDown title at SummerSlam. She also added that Sasha Banks will defend her Raw Women’s Championship at SummerSlam and most likely her opponent would be Asuka. With this massive note, Stephanie McMahon spoiled the party for both Bayley and Sasha Banks.

WWE Universe found out that something bizarre happened after the tag team match of Miz and John Morrison vs Otis and Tucker at the ringside. The light started to dim and the microphone failed to work properly and suddenly from nowhere as everybody was hoping “RETRIBUTION” came and converted the entire ring arena into Chaos as they did in RAW last week. They came in numbers and started to assault some of the WWE crew members and talents team. Even the commentators did not have any idea what was going on as they left their seats and all, but it was new faction “RETRIBUTION” who ended the show producing huge destruction on SmackDown Live.