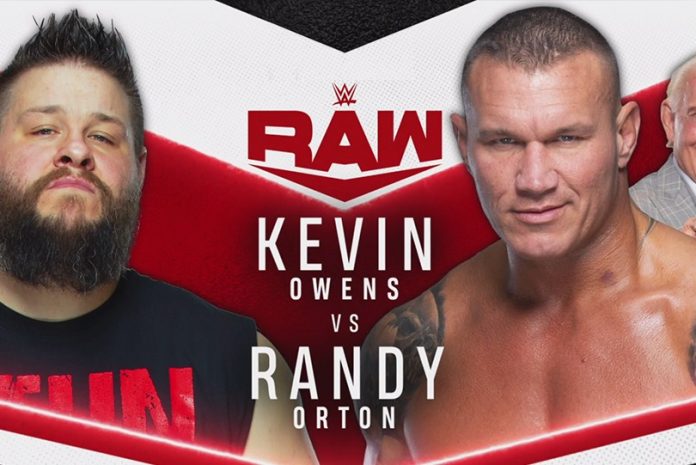 WWE RAW Preview: ‘The apex predator’ Randy Orton is all set to take on Kevin Owens next week on RAW. This match decided after this little chitchat between Ric Flair who told Kevin Owens he was becoming too much of a guidance counselor lately. Ownes said he just trying to be a locker room, unlike Randy Orton. This all led to Kevin Owens throwing down a challenge to face Orton next week on RAW.

Randy Orton who is invincible since Wrestlemania 36 and he will be looking to continue his dominance against Kevin Owens next week on RAW by beating Owens in that match. Randy Orton will face off against the Current WWE Champion Drew McIntyre at SummerSlam 2020 for the championship. Randy Orton does mind to produce anomaly RKO to Kevin Owens before the big match against Drew McIntyre.

However, Kevin Owens gets a major opportunity to beat Randy Orton and make his mark on the red brand that he also deserves a big match at SummerSlam. Moreover, Randy Orton has already mangled down three legendary superstars in the past two – months with his lethal punt kick. He might be looking to do the same against Kevin Owens next week on RAW and after that send the message to McIntyre that he will be the next victim of his lethal punt kick.

It will be interesting to see how Randy Orton strikes RKO first on Kevin Owens next week on RAW. But there are chances also that after the match McIntyre might attack Orton as Orton did to McIntyre last week on RAW from behind.