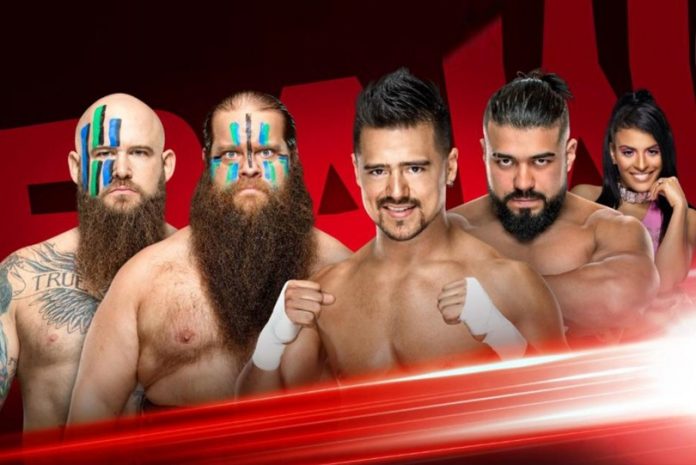 WWE Raw Predictions: This week’s Monday Night RAW will be full of grudge matches. As we almost get closer to the Horror Show at Extreme Rules, this week’s RAW also finalise their all fixtures for the Extreme Rules. But we may witness a little taste of next PPV this week on RAW. As the SmackDown Women’s Tag Team Championship will be on the line against the team of Asuka & Kairi Sane. Moreover, the Viper will be on action against 24/7 champion R-Truth. Then we have four men’s tag team action on this week’s RAW. And many more jaw-dropping contests will take place on this week’s Red brand.

Here are Monday Night RAW LIVE Streaming predictions, match cards and everything you need to know

The four men tag team match is set to take place on this week’s RAW. The team of the Viking Raiders will take on the team of Andrade & Angel Garza. And there are chances that latter one will stand tall in this match.

And my prediction is that after defeating the Viking Raiders the team of Andrade & Angel Garza will challenge the current Raw tag team champions The Street Profits for the titles match on The Horror Show at Extreme Rules.

It seems like a one-sided match when the viper will take on 24 /7 champion R-Truth. The Viper who is undefeated since Wrestlemania 36 will be ready to continue his unbeaten run against the R-Truth.

And my prediction is during this match we may see the inference of the Big Show to distract Orton and with this distraction R-Truth take the advantage and somehow defeat the Orton. And Later on, we also witness the Orton up against Big Show on the Horror Show at Extreme Rules.

As it reported by WWE, Wrestlemania rematch will take place again this week on RAW between Kevin Owens and Seth Rollins. ‘Monday Night Messiah’ Rollins knows how crucial this match will be for him before the Horror Show at Extreme Rules where he will face Rey Mysterio in a stipulation match ” An eye for an eye” match. Owens who will be in action after 2 months in a one on one situation, will try to give some KO to Rollins.

And my prediction is that during their battle Rollins’s disciples will come out and rescue Rollins from Owens’ brutality.

This match could be the main event for this week on Monday Night RAW since this time SmackDown Women’s Tag Team Championship will be on the line on RAW. The team of current WWE champion Asuka and Sairi Kane will take on current SmackDown tag team champions Bayley and Sasha Bank for the titles match.

WWE Raw Live in India: When and Where to watch it LIVE on TV and online

As per Indian timings, WWE RAW live telecast in India on Tuesday, July 14 at 5:30 am. It will be live and exclusive on Sony Ten 1 (English) and Sony Ten 3 (Hindi) channels. WWE RAW live streaming will be available on the Sony LIV app.