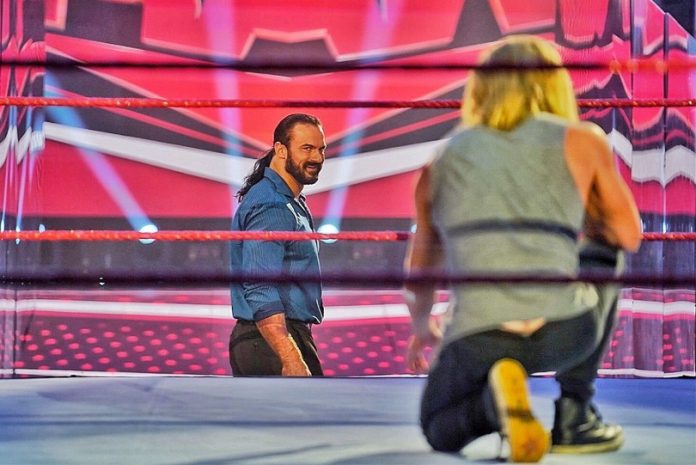 WWE Raw highlights: After the stunning performance on the lastest event at Extreme Rules, the Current WWE Champion Drew McIntyre has proved it once again that he ain’t going to lose this title soon. “The Scottish Psychopath” defeated “the showoff” Dolph Ziggler in a battling stacked the odds against him in a stipulation match; where “McIntyre was prohibited to use any arsenal against Dolph Ziggler if he does so, then he will lose his championship” which meant only Ziggler can take advantage of stipulation match.

And Ziggler tried everything to defeat McIntyre but he failed to do so even those slamming steel chairs could not let the confidence of McIntyre fell down. As a result of it, McIntyre delivered the running Claymore bout on Ziggler to retain his championship. This was McIntyre fourth successive victory in Championship matches after Wrestlemania 36.

In the latest episode of WWE Raw McIntyre walked out to address WWE universe for his future opponent. But shorty interrupted by Ziggler, who begged McIntyre for another rematch for the championship and McIntyre, admittedly accepted it but with a twist in the tale. This time Drew McIntyre has the advantage to decide what kind of Stipulation he wants against Dolph Ziggler in this rematch.

And he will reveal this Stipulation in next week on RAW. As McIntyre is again the favourite in this match to retain the title and based on WWE Rumors he might choose stipulation as a ‘Steel Cage match’ or ‘last Man Standing match’. Where he put his final show against Dolph Ziggler and end his rivalry with mammoth victory over him. After he does that, he will move for his next trip opponent at SummerSlam. And there are chances that he will challenge Randy Orton, who seems front runner at the moment for his Championship match at this event.

But not very far, the things are going to be very excited next week on RAW when McIntyre reveals the curtains from this stipulation suspense.