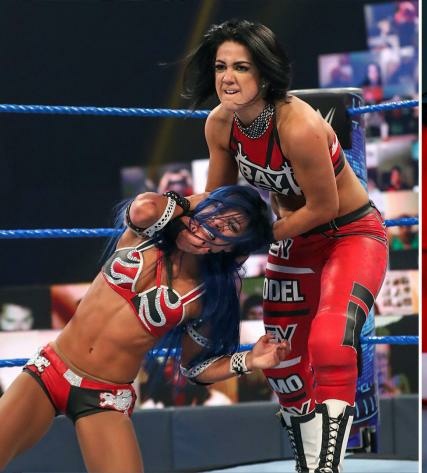 WWE News: In the latest episode of SmackDown Live we witnessed a catastrophic attack on Sasha Banks by Bayley. This all happened after Sasha Banks and Bayley’s Women’s Tag Team Championship match against Nia Jax & Shyana Baszler which they lost to Jax & Baszler in a jaw-dropping contest.

Also Read:Bayley finally breaks her silence on her friend Sasha Banks in the latest episode of WWE Smackdown &#8211; 05 September, 2020

However, the real trouble began after that when Bayley lose her calm and decided to betray Sasha Banks, and attacked her with steel chairs and left her helpless in the ring and being taken out on stretcher by WWE staff. WWE. com also has provided the updates on Sasha Banks injury.

INJURY UPDATES: @SashaBanksWWE has been taken to a local medical facility following a brutal attack by @itsBayleyWWE, and @WWEBigE is also undergoing tests after suffering lacerations as a result of an attack by @WWESheamus on #SmackDown. https://t.co/4NikEIzkq5

The Boss seemingly sustained a knee injury after crashing into the ring post during the WWE Women’s Tag Team Title Match, then being on the receiving end of Shayna Baszler’s relentless offense. But the worst was yet to come for Banks.

After she refused medical attention, Banks was brutally attacked by her partner and best friend, Bayley, who culminating the assault by wrapping a steel chair around Banks’ neck and jumping off the second rope to stomp on it. Banks was taken from the WWE ThunderDome in an ambulance. WWE.com can confirm that Banks was taken to a local medical facility and is being evaluated.

However, it will be curious to watch out when will Banks get her hand on Bayley to take revenge from her.