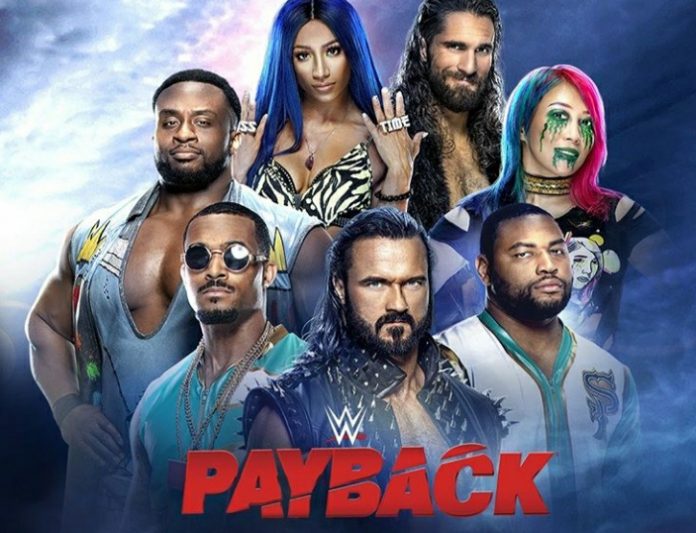 WWE Payback Live: We are just a few hours away from another action-packed event of WWE – – Payback. It has already filled with some flabbergasting matches where Championships will be on the stake, and superstars will be looking to take their revenge on this very night. There is no reason behind that why it is called ‘Payback’ since it is time to settle their accounts with each other.

Payback will begin at 7 p.m. ET with the show expected to last approximately three hours, not counting the kickoff show, which starts one hour prior to the main card at 6 p.m. insidesports will be with you the entire way on Sunday with live results, highlights and analysis.

Before actually going into the final match card. Let us see the final predictions and the match winner who can surprise us, or upset us tonight at Payback.

WWE seems committed to Riddle as a top-tier player. And if that’s the case, then you don’t have him lose his first big pay-per-view match. There could be plans to extend their feud through shenanigans by Corbin, but I just don’t see it happening. An angry Corbin trying to continue to pay off people to take out Riddle after a loss just makes more sense.

Credit to WWE for booking Crews strong during most of his U.S. title run. But if he’s just going to run through the entire Hurt Business, what’s the point of the group? Crews outsmarted Lashley in the arm wrestling contest, beat MVP twice clean and now faces the man who nearly took down Drew McIntyre for the WWE title a couple of months ago. Crews’ reign ends here.

While I initially expected this to be the spot where the Golden Role Models lost their straps, I also expected to see Ruby Riott and Liv Morgan as the ones contending at Payback. Why WWE would throw Baszler and Jax together for this when Baszler already made crystal clear her intentions to be Asuka’s No. 1 contender makes no sense to me. The only way I can see Baszler and Jax winning is if WWE’s goal is to have a “stronger” team be the ones to defeat Bayley and Banks only for Baszler and Jax to implode in a week or two and drop the titles. But that’s bad booking because the goal of a more established team beating Bayley and Banks would be to put them over in the first place. So I’ll err on the side of retention here.

There’s a point where the Mysterios need to pick up a win to keep this moving forward. Rollins has tormented Rey in every way imaginable, including removing his eyeball and brutalizing his son as Rey sat by helpless and handcuffed to the ropes. Then, the Mysterios were left to be attacked by Retribution. There has to be a moment where the Mysterios get a victory, or else there’s nowhere else for this story to go.

There are few worse possible decisions than having Lee lose here. If he’s going to be a player on the main roster, he shouldn’t be dropping matches yet — even against Orton. There’s an easy path to victory here with Drew McIntyre helping Lee steal the win. That is an issue in its own right, with Lee “needing help,” but it’s the best route to go to protect everyone involved and continue building toward the Orton/McIntyre rematch.

WWE had a huge opportunity to rethink and retool the Reigns character when he courageously returned from his battle with leukemia. Not just in terms of how it booked him but also the look of his character (the vest, the entrance music, etc.). While it did find some restraint by not booking Reigns in the title picture for months, the goal was ultimately to put him over at WrestleMania. With Reigns pulling out amid COVID-19 and now back, WWE could feel the need to book him back into the position they planned him to take four months ago. Let’s hope they show similar restraint considering Wyatt just won the title one week ago, this is a triple threat match (meaning Reigns does not have to be involved in the finish to lose) and it would behoove WWE from a booking perspective to build a longer, drawn-out feud with Reigns chasing Wyatt.

The IIconics vs The Riott Squad

Ruby Riott found herself on the receiving end of mockery from Peyton Royce & Billie Kay in recent weeks, with the Australian duo claiming Riott had no friends. But after apologizing to her estranged partner Liv Morgan, The Riott Squad was back in action and the odds evened against The IIconics. But in several bouts pitting members of the two teams against each other, it seemed as though Riott and Morgan needed to get back on the same page, while The IIconics often had the last laugh.