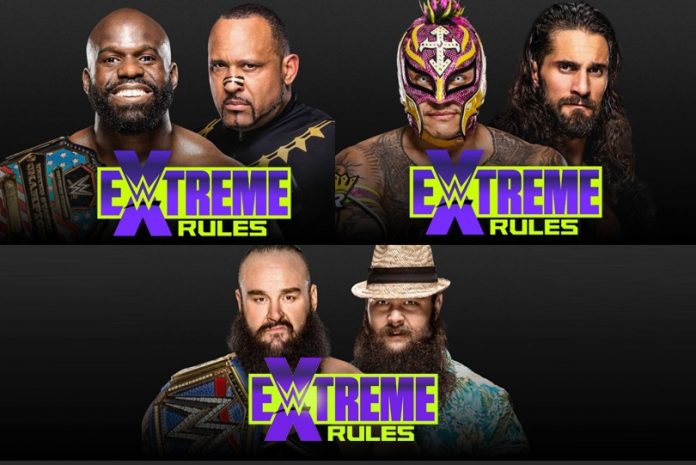 WWE Extreme Rules 2020: The next WWE PPV is less than a fortnight away. As things start getting serious at WWE Raw and WWE Smackdown, more and more Extreme Rules match cards are getting confirmed. So far there have been six confirmed matches which will take place on July 19, 2020, at the WWE Performance Center in Orlando, Florida. One of the main events would be the women’s championship match between Asuka and Sasha Banks.
The Boss has recently shifted to Raw and on her arrival, she made sure to claim her spot at the top by challenging The Empress of Tomorrow for the titles match. Another big match would be between Bray Wyatt and Braun Strowman. Although a non-title match, it still has the potential to get messy and that too in a literal sense. The two superstars will go head-to-head in a swamp fight.

Here are all the Extreme Rules match cards confirmed so far:

WWE Raw Championship will be on the line when these two face off each other at this event. Dolph Ziggler will try to get his hands on the gold and become the New WWE champion but ‘the psychopath’ Drew McIntyre will give his all to continue his reigning period in WWE after the Extreme Rules Night. Both the superstars have put their show in the last couple of weeks to take advantage on their side. But the things are going to decide on Extreme Rules.

It is finally happening. Seth Rollins and Rey Mysterio are all set to settle scores against each other at the WWE Extreme Rules which is now called The Horror Show at Extreme Rules. Interestingly, it is not the usual one-on-one match but a bizarre kind of stipulation match instead. The two will not lock horns or hands instead they will be locking eyes. This stipulation match is called as’ An Eye for an Eye’ match which left everybody astounding.
The only question remains who will stand tall in this gruesome stipulation match ‘An Eye for an Eye’. Whether Mysterio achieves the ruthless justice he craves, or will Rollins finish the barbaric attack that set this match in motion?

WWE Raw Women’s Champion Asuka will defend her title against WWE Smackdown Women’s one half tag team champion Sasha Banks. This match is going to be a thriller one since it is very important for both the brands to maintain their reputation which will be on the stake during this match.

Will it be Asuka who hold the glory at Extreme Rules and continue her supremacy on the red brand. Or will it be Sasha Banks to crown as doubles women’s champion and shatters the Asuka’s dream?

The old friendship of “the monster among men” and “the eater of the world”  now turned into a brutal force. As both the stars are famous for playing mind games and confuse their opponents but this time they will face each other at the Extreme Rules in a non – title Wyatt Swamp Fight.
Will the Braun Strowman dig his old darkness once again or Wyatt will produce the ‘Sister Abigail’ on him.

WWE SmackDown Women’s Champion and One half of the tag team champion Bayley will defend her WWE women’s title against Nikki Cross at the Horror Show :Extreme Rules. Nikki Cross got this opportunity by defeating other three women’s for Bayley’s title on SmackDown. Now it will be interesting to see whether Bayley will retain her title or Nikki Cross has some surprise for Bayley and Crown as New WWE Women’s Champion at Extreme Rules.