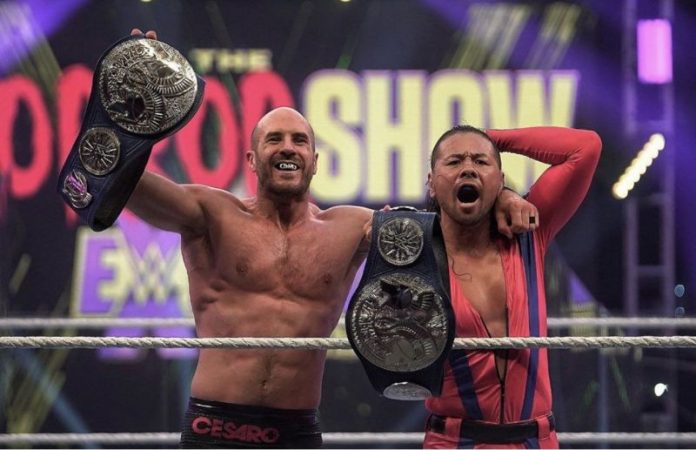 WWE Extreme Rules highlights: This Extreme Rules was more about taking revenge and destroying opponents in half. When five championships were put on the stake on this ferocious night where anything can happen in terms of the stipulation. This night was full of destruction and dominance as we also witnessed some championships changed hands and some did not.

However, this Extreme Rules became more terrified with two eye-opening matches such as ” An eye for an eye match” and “Wyatt Swamp Fight”.

Considering this lets us check the champions which changed hands and which did not.

If any match where no casualties were taken place during this event then this was the perfect match for that. Since this match officially was not started because of the absence of Apollo Crews, who did not show up for this match. And the only reason for that, injuries which he faced two weeks ago on RAW. As a consequence of it, MVP called out himself as the New United States Champion with the brand new Championship.

This championship match stunned everybody when the Champion Asuka was battling with the Challenger Sasha Banks to retain her Women’s Championship. But this contest ended in a strange way, while both stars giving their every inch to get the glory. And Asuka had the upper hand in that match as though she was ready to cause Sasha Banks by spitting on her face with Green mist. Banks last moment move made that spit on the match official eye, and Sasha Banks Co. Bayley took the advantage out of it and wore the match referee’s dress counted 1,2,3 given the advantage to Banks. And helped her to become the doubles champion.

However, it will be interesting to see whether this victory is acceptable or not.

The current SmackDown Women’s Champion and one half of the tag team champion Bayley took on the Women’s Nikki Cross to defend her Women’s Championship. Bayley put the great pressure on Nikki Cross with the help of her Co. Sasha Banks, who helped her ringside. This match took place for more twenty-five minutes and it was Bayley stood tall after the match and got the victory over Nikki Cross. And Bayley once again proved with this win that blue brand is her show.

WWE fans were waiting for this match so long when the RAW Champion Drew McIntyre marked his way to enter the ring and waiting for Ziggler’s stipulation match and it was turned out as “if Drew McIntyre does anything outside the rules of a normal singles match, we’ll have a New Champion”.

As the match started Dolph Ziggler tried to take advantage by this stipulation but McIntyre had plan for Ziggler and both the stars battled so hard for the glory. Hitting those steel chairs on McIntyre and slamming him on the tables Ziggler did everything to get the title. But it was ruthless aggression of McIntyre which made him to successfully retain his Championship by giving claymore shot to Dolph Ziggler and got the unleashed victory over him.