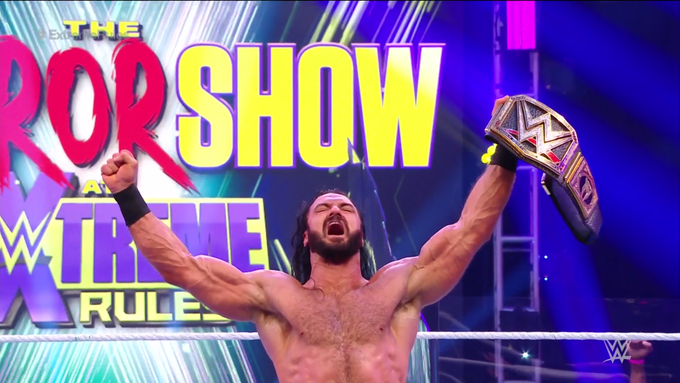 WWE Extreme Rules 2020 Results : The thunderous night was here when the WWE’s vociferous PPV The Horror Show at Extreme Rules kicked-off this Sunday night live from Performance Center. This event commenced with the stipulation match between The New Day up against the team of Cesaro & Shinsuke Nakamura for the Smackdown’s Tag Team Championships in a Tables Match. On the other segment we had SmackDown Women’s Championship match which took place between Bayley and Nikki Cross.

Moreover, in a “An eye for an eye match” we witnessed some bizarre circumstances in that when Seth Rollins and Rey Mysterio battled out in that match. Apart from that the RAW Women’s Championship match ended in strange way.

And many more devastating contests that took place at this aminus night on the Horror Show at Extreme Rules.

Here are all the Live from WWE The Horror Show at Extreme Rules Live July 19, 2020:

It was one of the most shocking and Bizzare match that happened at this event. The match started between the RAW Women’s Champion Asuka up against the challenger Sasha Banks and her Co. Bayley joined her ringside. As everybody was hoping this match to be the best of the night and it almost did so. Both the superstars tried every skill to knock out each other by giving German suplex.

As Asuka was almost there to pin the Sasha Banks when Asuka tried to spilt green mist on Banks but it turned out to spilled on match referee. And Bayley took the advantage of it and wore the referee’s dress counted 1,2,3 and helped her friend Sasha Banks to become the doubles champion. But it will interesting to see whether this victory be acceptable or not.

WWE fans were waiting for this match so long when the RAW Champion Drew McIntyre marked his way to enter the ring and waiting for Ziggler’s stipulation match and it was turned out as if Drew McIntyre does anything outside the rules of a normal singles match, we’ll have a New Champion.

As the match started Dolph Ziggler tried to take advantage by this stipulation but McIntyre had plan for Ziggler and both the stars battled so hard for the glory. Hitting those steel chairs on McIntyre and slamming him on the tables Ziggler did everything to get the title. But it was ruthless aggression of McIntyre which made him to successfully retained his Championship against Dolph Ziggler and got the unleashed victory over him.