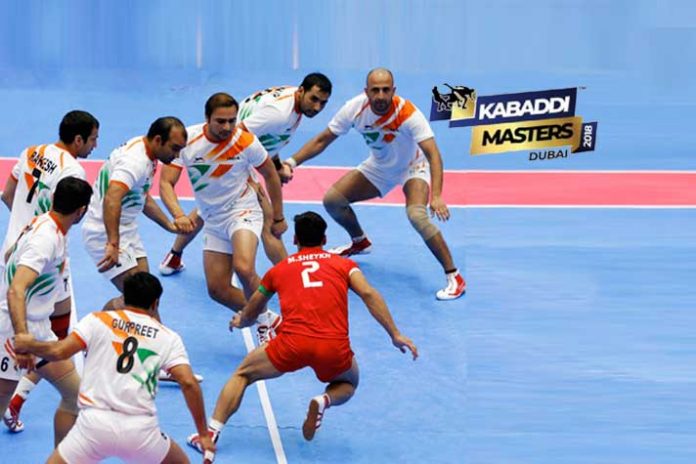 The International Kabaddi Federation, with Star India as its broadcast partner, is organising the 6-nation Kabaddi tournament – Kabaddi Masters Dubai 2018, supported by the Dubai Sports Council.

The tournament, beginning on the 22nd of June 2018, will be a 9-day action packed sporting event showcasing the best of kabaddi action, as the six participating nations – India, Pakistan, Republic of Korea, Iran, Argentina and Kenya – compete at the Al Wasl Sports Club in Dubai. The matches will be aired live at 8.p.m. IST on the Star Sports Network: SS2, SS2 HD, SS1 Hindi, SS1 Hindi HD, SS1 Tamil.

Dubai is home to many a sporting spectacle including Beach Soccer Intercontinental Cup, TTD Super Cup, Dubai Duty Free Tennis Championships, Rugby 7s, Abu Dhabi Grand Prix, Dubai Polo Gold Cup Series and many more, celebrating an immense sporting culture. In line with the growing multi-sports culture, Star India Pvt. Ltd. and IKF will give fans the opportunity to watch the best Kabaddi action in Dubai through a clash of the Titans.

Janardan Singh Gehlot, President, International Kabaddi Federation said, “Kabaddi is fast becoming a renowned sport globally, and we at IKF look forward to exploring options for a comprehensive international Kabaddi calendar that is active annually, successfully pinning Kabaddi across the world map. Kabaddi Masters Dubai 2018 is our first step in that direction and will elevate the stature of our sport considerably. We are thankful to the Dubai Sports Council as well as Star India for their strong role in making this happen.”

Speaking on the initiative, a Star India spokesperson said “At Star India, it is our endeavour to foster a multisport culture in the country. In line with this, Kabaddi has always been close to us, given the VIVO Pro Kabaddi League. We are excited about the Kabaddi Masters Dubai 2018 and firmly believe it will give greater impetus to the sport in the international arena. Given the stature and strength of the participating teams, our viewers can expect top quality best Kabaddi action in exciting and entertaining matches.”

Dubai Sports Council, spokesperson, said, “Kabaddi Masters Dubai 2018 marks the very first time we are hosting an International Kabaddi tournament at such a huge scale in Dubai. It is our endeavour to successfully become a global destination for both indoor and outdoor sporting spectacles, and this tournament reinforces our commitment in that direction. We hope to offer Kabaddi fans an experience that will keep them at the edge of their seats.”

Srinivas Reddy, the Coach for the Indian Team said: “We are very proud that our sport has grown to this scale internationally. Kabaddi Masters Dubai 2018 will give us the chance to go up against the best teams. We look forward to proving ourselves once again and will go all out to gun for the trophy.”

Laventer Oguta, President of the Kenya Kabaddi Federation and Coach for the Kenya team said, “The international Kabaddi ecosystem is growing at a remarkable pace, and the partnership between IKF and Star is already a model for emerging sports across the world. I already see a place for Kabaddi in the African Games in the near future.”

Muhammad Sarwar Secretary General Pakistan Kabaddi Federation said “Kabaddi Masters Dubai 2018 is an excellent opportunity to give athletes from Pakistan, the opportunity of showcasing their mettle at an international level. A tournament of this stature does well to bring nations together, as audiences enjoy the best of action the sport has to offer.”

RICARDO ACUÑA, the President of the Argentina Kabaddi Federation and coach of the Argentina team, said, “with Argentina being a predominantly football nation, it has been our endeavour to introduce multiple sports as a way to present a whole new perspective on sports to the country. The introduction of Kabaddi to Argentina has redefined sports participation, delving into our diverse talent pool and bringing forth young talented individuals to make a mark in the world of Kabaddi. Kabaddi Masters Dubai will surely be a moment of reckoning for Argentina’s Kabaddi talent and we look forward to taking this competition head on.”

The six participating teams are divided into 2 groups of three. The teams in each group will play two matches against every other team in their respective group, with the top 2 teams from both groups qualifying for the semi-finals. The two teams to emerge as victors from the semi-finals will play each other in a grand finale. Kabaddi Masters Dubai 2018, will see India and Pakistan up against each other, which, in past competitions, have been nail-biting experiences that have kept fans at the edge of their seats.

India is pitted in Group A with Pakistan and Kenya, while Group B consists of Iran, DPR Korea and Argentina.