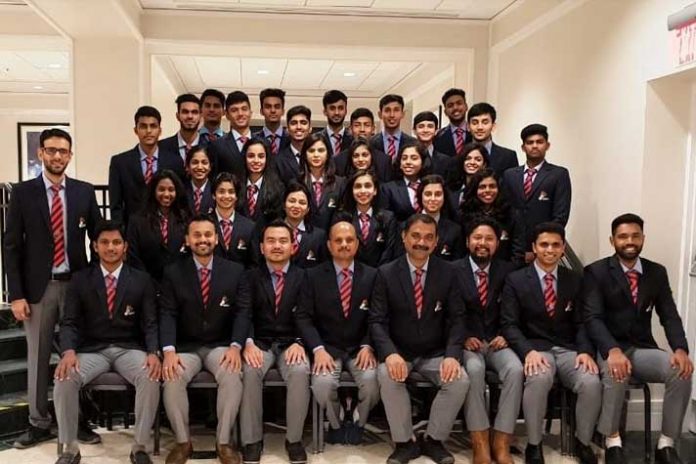 Indian shuttlers made a positive start to their campaign in the Li Ning BWF World Junior Badminton Championships 2018, which got underway at Markham (Canada), beating Sri Lanka 3-0 in their opening tie of the Mixed Team event late Monday evening.

In their group E match, the Indians took just 83 minutes to dispose of their opponents as the men doubles pair of Krishna Prasad Garaga and Dhruv Kapila combined well to beat the Sri Lankan duo of Chirath Illepuerumachchi and Gavin Dulsith Moragoda 21-11, 21-10 rather easily in 27 minutes.

However, it was a bit of struggle in the Women Singles as Malvika Bansod was stretched by her rival from the island nation, Dilmi Dias, who started well to take the first game off the Indian. But then Malvika came back strongly in the second to level the score before finally wrapping it up in the next to win 14-21, 21-11, 21-16 in 39 minutes to put India 2-0 up.

It was a bit of a shock start for Malvika as nothing initially went right for the shuttler with Dilmi mixing her shots cleverly to put the Indian in some discomfort. Malvika was guilty of indulging too much in net-play which gave away unnecessary negative points to her opponent. But the Indian was quick to realise her mistake and played a clinical game thereafter to romp home winners.

It was left to the world junior No. 3 Lakshya Sen and the reigning Asian Junior champion, he did not disappoint as he wrapped up the tie with a 21-9, 21-8 triumph in the men singles over Dumindu Abeywickrama. It took him just 17 minutes to complete the formality.

The Indians have their second group match against Kenya which they will play later tonight.