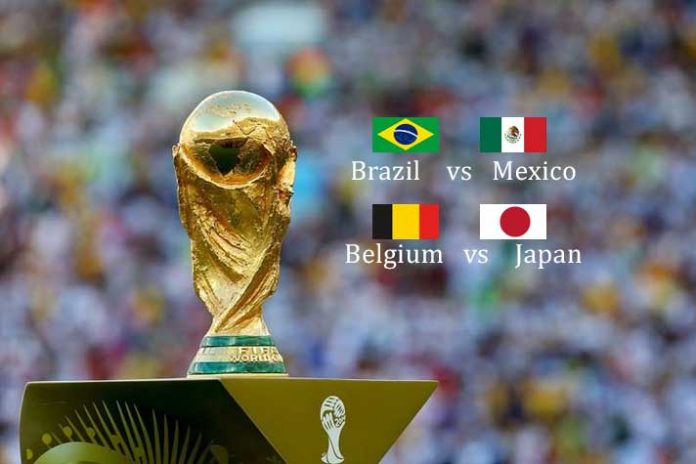 Brazil will take on Mexico in their quest to book a quarter-finals slot and correct their error-filled campaign in the last edition of the FIFA World Cup finals at home. The match at the Cosmo Arena in Samara will kick start at 7:30 PM India time.

Neymar’s team will though have to be wary of the Mexicans not just on their present form, but also for the outcome of their latest FIFA World Cup encounter. During the World Cup 2014 in Brazil, Mexico have held the hosts to a goalless draw. In Russia, they have sent defending champions Germany packing with a 1-0 win.

This World Cup is becoming notorious for early elimination of heavyweights – after defending champions Germany’s exit at the group stage, Lionel Messi’s Argentina and Cristiano Ronaldo’s Portugal were shown the door in the round of 16.

Momentum and form though are with Brazil. After playing a 1-1 draw with Sweden, Brazil has been playing as a well-synchronised cohesive unit. In identical 2-0 wins over Costa Rica and Serbia, the defence for Brazil has been rock solid and frontline precise, fast and penetrative.

There won’t be an award to predict the outcome of the Belgium-Japan match. Belgium are their pool toppers, winning their all three games while Japan have been rewarded for their goodness – lesser cards have helped them progress in a tied situation with Senegal Group H. The match at the Rostov Arena will start at 11:30 India time.

Football lovers in India can catch all the live action on the designated Sony Sports Cluster channels and SonyLIV from the links below:

Brazil will be looking for early success. For, the Neymar and Co are well aware that till date they have not conceded a single goal to Mexico in their previous four World Cup meetings and scored 11.

In the other tie slated for the day Belgium are not just the highest goal scorer of the Group league phase, they are also one of the only three teams with Croatia and Uruguay to enter the round of 16 with an all-win record in their respective groups. The last Asian team in fray in the World Cup 2018 finals now, Japan will be hoping against hopes as they have already seen their good behaviour helping them ahead of their skills as the team had prevailed in the Group H for having seen lesser yellow cards as they were tied on points (four each) with Senegal.

Sony Ten 2 and Sony Ten 2 HD will provide live the English language world feed, the matches will be broadcast live with the Hindi commentary and titles on Sony Ten 3 and Sony Ten 3 HD, while Sony ESPN broadcasts the action live in regional languages (Tamil, Telugu, Malayalam and Bangla). The fans on the move can catch all the action of SonyLIV ap and SonyLIV.com.