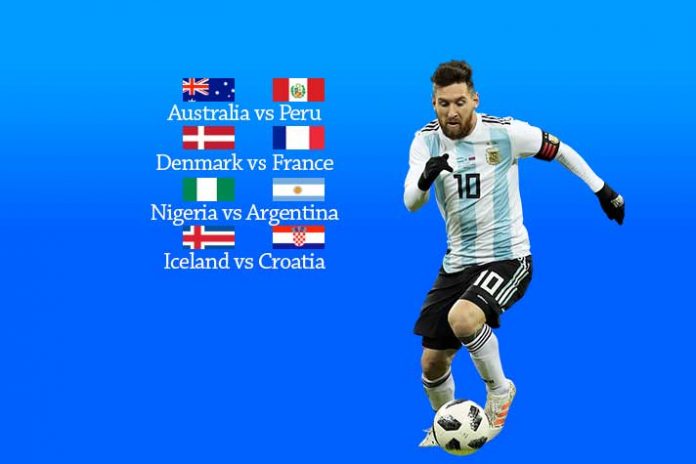 Lionel Messi and Argentina have their last chance to stay in the FIFA World Cup 2018. Only a win with an impressive margin can undo the damage Messi’s image and Argentina’s prospects have suffered in their earlier two Group D matches.

Disgraced to be at the bottom of Group D table, Messi and Argentina are staring at the elimination from the FIFA World Cup 2018. Combinations, permutations and a possibility to defeat Nigeria have kept hope alive, for winless Argentina. The hope will be driven by Messi’s resurgence, if at all, in this litmus test.

A win alone will not be enough, though. Iceland may still spoil Argentina’s party if they manage to celebrate a victory over Group D leaders Croatia – a big ask for the debutants. Nigeria may cruise through even with a draw, if Croatia as expected defeat or hold Iceland.

Argentina faces the ultimate pressure going into their last Group D game at the St Petersburg Arena at 11.30 pm India time today (Tuesday). All the action will be streamed live on Sony LIV app and SONYLIV.COM.

The action today (Tuesday) starts with the Group C games between Australia and Peru and Denmark and France from 7:3o PM as all the last round matches in each group are scheduled concurrently.

The two Group D games, involving Nigeria and Argentina and Iceland and Croatia are slated for 11:30 pm. Click on the links below for all the live action.

Australia go into the match with a hope of keeping their hand on the last string to see them through to the round-of-16 knock out stage. Peru will play for pride and a consolation win as two successive defeats in their two Group D games so far.

Australian have lost to Croatia and played out a draw with Denmark, who are placed better on four points from the draw and a win over Peru. The Kangaroos with a big win over Peru can match Denmark on four points. And then, they will be hoping that France maintains their winning run as they take on Denmark.

The Group C leaders France have already assured themselves of a second-round berth in the FIFA World Cup 2018. Denmark, place second in the group with a win over Peru and draw against Australia, will at least need to restore parity with the strong France side to evade the threat of an early elimination. A draw will hand Denmark the ticket to the next round irrespective of the outcome of the Australia Peru match.

Else, Denmark may still be overtaken by Australia with a likely win over Peru if the Danes fail to pull off a favourable result at the Luzhniki Stadium in Moscow.

Croatia after wins over Argentina and Nigeria will take the field against minnows Iceland with the aim of progressing into the next round with a 100% victory record. Iceland has given the glimpses of their brilliance in holding Argentina by brilliantly marking Lionel Messi. Now is the challenge to upset the Group leaders if they have to raise the prospect of staying in the World Cup.

Croatia have assured themselves of a next round berth irrespective of the outcome of their last Group D match. For other three teams it is a complex situation where anyone of them is not ruled out of advancing further. Iceland will be banking on capitalising from this peculiar combination and permutation.

This one match holds the threat of one of the biggest first-round eliminations in the World Cup history. Only a big win over Nigeria may help Argentina salvage their reputation and situation.

While Nigeria may cruise comfortably with a draw against Argentina, Messi and Co are in a must-win situation to survive. Even if they rise to the occasion, Argentina’s fate will be decided by the outcome of the Iceland-Croatia tie.

The only time Argentina have failed to go beyond the first round was way back in 1934. However, there was no group system then and the World Cup from round one was played on a knockout format.

Permutations permitting, three points versus Nigeria will send Argentina through. A historical point should boost Argentina’s morale further that they have never completed a first-round group stage at a World Cup without at least one victory.

SonyLIV will live stream the action on the SonyLIV app and SonyLIV website for all the SonyLIV subscribers. Other may catch a 5-minute delayed feed on the same digital platforms.