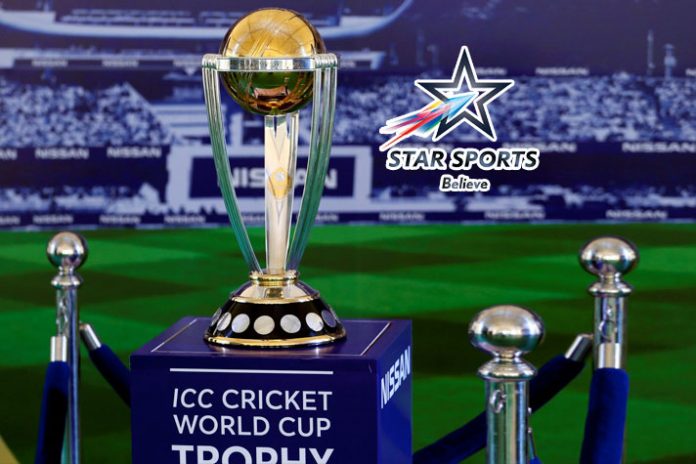 Star Sports has opened ICC World Cup with a record audience.  The most anticipated cricketing event of the year, ICC Cricket World Cup 2019 has records a massive 114 mn reach for the opening match between England and South Africa on Star TV network. This is the highest audience ever for any World Cup opening game. The number is 2.2 times higher than the first game of the most recently played ICC tournament –  the ICC Champions Trophy 2017 opener between England and Bangladesh.

The average impressions recorded for the ICC CWC 2019 Opening match are 101 mn, Star Sports has stated in a Press release.

The ten-team tournament being played in a single-round robin format from May 30 to July 14 is broadcast on Star Sports Network and Hotstar, the official global rights holder of the tournament.

Commenting on the opening numbers, a Star Sports spokesperson said, “We are thrilled with the record opening numbers and believe that the early numbers will only get bigger with the India games that follow.”

The broadcast of the ICC CWC 2019 began with the warm up matches and is available in English, Hindi, Tamil, Telugu, Kannada, Bangla and Malayalam (Opening and all India match days), apart from Select Dugout. The Star Sports network pulled all stops to make the Opening game the biggest ever. The Opening day saw Master Blaster Sachin Tendulkar make his debut as a commentator and expert with a special segment dedicated to him called #SachinOpensAgain.

Sachin was seen with other legends like Sourav Ganguly and Virender Sehwag going down memory lane. Sachin will be seen in the commentary box for all other India games as well. #SelectDugout is back for the ICC CWC 2019 and was part of the Opening game too with legends such as VVS Laxman, Matthew Hayden, Dean Jones and Scott Styris along with Parthiv Patel and Irfan Pathan. #SelectDugout will be available for all India games, Sundays, Semis and the Finale.

The record opening is also driven by a strong 360-degree marketing campaign.

Star Sports unveiled the official campaign – #CricketKaCrown at the time of the IPL 2019 playoffs which resonated well with the viewers and has already crossed 50 million views across digital platforms.  The TVC was complemented by a strong on-ground activation campaign #LeJayenge in leading metros through collaboration with public transportation agencies which added to the euphoria around launch of the tournament.

Continuing the fan banter into the tournament, fans can expect a series of films with the Indian fan – Vicky – planned under #CricketKaCrown for India vs Australia (currently on-air), India-Pakistan and India-England.

Ashes 2021-22: Ben Stokes gets emotional for his late father ahead of Ashes opener, says ‘You will be with me this whole week’