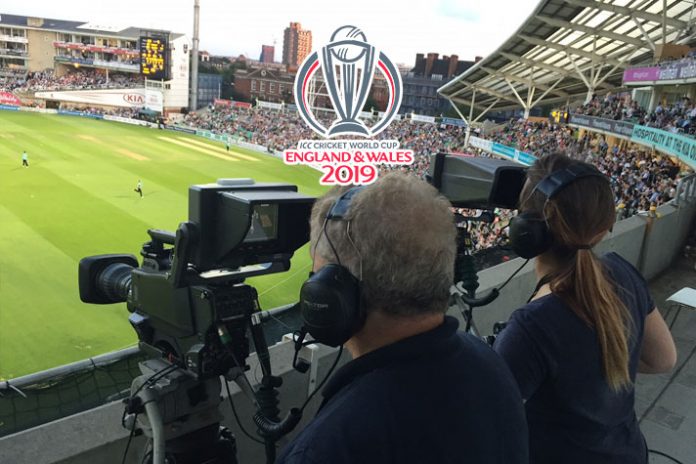 The ICC Cricket World Cup 2019 in England & Wales will reach to more than 200 territories the world over through 25 broadcast partners.

International Cricket Council Media rights partner Star Sports, besides broadcasting the 12th edition of the Cricket World Cup in seven languages for Indian audiences, will also telecast the ten-team competition in the rest of the sub-continent.

Local broadcaster in UK, Sky Sports will show all matches via Sky Sports Cricket which becomes a dedicated ‘Cricket World Cup’ channel from May 30.

In Canada, Willow TV will launch a channel ahead of the ICC Men’s Cricket World Cup 2019, targeting a reach of four million households through all major cable and satellite operators.

Meanwhile in China, Fox Sports will broadcast 25 live matches with a further nine on delayed coverage.

In South America, fans can enjoy coverage via 3 ESPN Apps which cover the entire continent. ESPN South, ESPN North and ESPN Brazil can be downloaded via the App store.

In Australia, Channel 9 will carry 21 matches, including all Australia matches, the semi-finals and final via their channel 9GEM. They will complement Fox Sports Australia coverage, who will broadcast all matches live via Fox Sports Cricket, including the tournament warm up matches.

Fox Sports Australia will be joined by Star Sports (India and the rest of the Indian Sub-continent), Sky Sports (United Kingdom & Republic of Ireland), Sky TV (New Zealand), SuperSport (South Africa and Sub-Saharan Africa) and Ten Sports (Pakistan) in the live broadcast of the tournament warm up matches, from 24 May.

A massive audience of 300 million people in India and the Indian subcontinent will be also be able to watch via digital streaming thanks to Star Sports’ Hotstar platform which continues to break records.

Fans across the world will also be able to keep up to date with all the action on the move and on-demand through in-play clips highlights and event content made available via the ICC’s global network of digital clip rights licensees.

A total of 12 digital partners with coverage in more than 200 countries will provide cricket fans up to six minutes per hour of near-live match content – as well as match previews, media conferences, match highlights and event features – available to view across their portfolios of smartphone apps, websites and other digital properties with a focus on mobile.

From an audio-only perspective, a full complement of licensees will supplement the live broadcast coverage including joint production between Channel 2 and India-based Sports Flashes, to create a ball-by-ball English world feed, for all matches.

In addition, news access partnerships are in place with Perform and SNTV for all matches, with Reuters and AFP joining for select matches, including the semi-finals and final. Each News Access Partner will distribute 90-second news clips, to their clients across the world, often to non-traditional cricket playing nations such as Turkey, Kuwait and Iceland.

In a world first for ODI cricket, the ICC has partnered with Cineplexes across India, the UAE and Bahrain to broadcast live matches. A selection of matches can be viewed at INOX (India), Novo (UAE & Bahrain) and Reel (UAE) cinemas, across the course of the tournament. The details are published on Cineplexes’ website.

ICC also continues its partnership with Global Eagle Entertainment (GEE), who through their OceanPrime channel, will reach fans aboard major cruise liners across the world.

Sunset+Vine will produce the World Cup 2019 for the International Cricket Council and offer the feed to the broadcasters the world over.