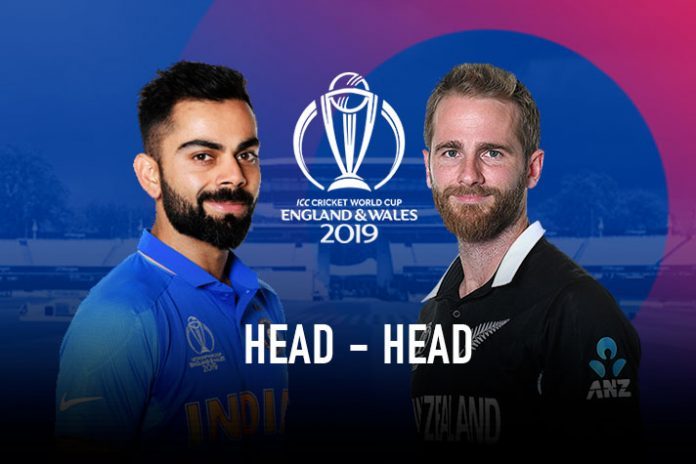 The Men in Blue and Black caps have not played each other at an ICC World Cup since 2003. Their last meeting at the Trend Bridge in Nottingham on June 13 was washed out. In their previous encounters, New Zealand have won four World Cup meetings between the pair and India three

India and New Zealand face off in the first semi-final of the ICC Men’s Cricket World Cup 2019 – and it is a mouth-watering match-up long in the making. The two sides’ group stage clash at Trent Bridge fell foul of the weather last month, so the wait for a first World Cup meeting since 2003 went on. But there will be plenty on the line, not least a spot in the World Cup final, when the two sides do finally lock horns on Tuesday at Old Trafford.

The two sides had not met in ODI cricket since 2017 until a five-match series at the start of this year Down Under. And if those games are anything to go by, it is India who hold the edge in the head-to-heads.

They won that series 4-1, including playing the last two games without a rested Virat Kohli as Rohit Sharma took over captaincy duties temporarily.

Mohammed Shami, so impressive in his efforts during this World Cup, was the man of the series in New Zealand. With Jasprit Bumrah – like Kohli – rested for the series, Shami took over the senior seamer role and was a key cog in the series win.

Kulpdeep Yadav and Yuzvendra Chahal both enjoyed success in that series as well, so it remains to be seen if that will influence selection decisions for the semi-final.

The Black Caps struggled for runs in that series, not once did they pass 300 and the same problems have followed them to the World Cup where they are also waiting to pass that figure.

Overall, India have won six of the last seven ODIs the two sides have played but a closer inspection of their World Cup meetings makes for prettier reading for New Zealand.

In seven World Cup meetings between these two sides, it is the Black Caps who have the better record. They have won four clashes to India’s three in matches dominated by the chasing side.

Six of the seven encounters have been won by the team batting second, but as we have seen in England this summer, that has not always been the best option. And despite their seven previous encounters, 2019 will be the first time the two sides have met in the semi-finals.

Coincidentally, it was also at Old Trafford that India and New Zealand first locked horns in a World Cup. In a Group A meeting that India had to win to make the knockout rounds, they could only manage a total of 230 from their 60 overs, Syed Abid Ali clubbing a late-order 70 to get them there.

And when Glenn Turner anchored the Black Caps’ chase with an unbeaten 114, victory and a semi-final spot was theirs with four wickets and seven balls remaining.

Four years later and once again the Black Caps emerged on top, dominating the early years of this burgeoning rivalry. India again batted first but Sunil Gavaskar’s stubborn half century was the best they could manage in a total of 182 all out.

In response, Bruce Edgar accrued a unbeaten knock of 84 in an eight-wicket win, although it took the Black Caps 57 overs to get over the line as India were again sent packing at the group stages while the Kiwis advanced once more to the final four.

Four years after becoming world champions for the first time, India hosted the 1987 World Cup and met New Zealand twice in the group stage. And both times they emerged on top, first in a 16-run in Bangalore that owed much to Kapil Dev’s unbeaten later order fireworks. And then in Nagpur two weeks later, it was Chetan Sharma’s hat-trick that caught the eye along with a Gavaskar hundred in a nine-wicket win.

Fast forward to New Zealand hosting in 1992, and in the only game of the tournament held in Carisbrook, it was the home side who again dominated. Sachin Tendulkar made 84 out of India’s total of 230/6 but the Black Caps chase was smooth and serene.

Mark Greatbatch was the star man with 73 as New Zealand ended up topping the points table while India were out before the knockout rounds.

It was in 1999, the last time the World Cup was in England, that India and New Zealand first met beyond the group stages. This time it was in the Super Sixes and once again the Black Caps were moving on while India were given their marching orders.

Ajay Jadeja hit a half century for India as they made 251/6 but Matt Horne and Roger Twose’s half centuries claimed New Zealand a five-wicket win with ten balls remaining.

New Zealand might have the wood on India in World Cups overall. But the most recent clash 16 years ago at Centurion saw India turn the tide in the Super Sixes.

Zaheer Khan knocked over New Zealand for only 146, the left-armer at the peak of his powers in taking 4/42. And India rattled of the chase for the loss of only three wickets, Mohammad Kaif and Rahul Dravid to the fore to help India into the semi-finals and send New Zealand home.