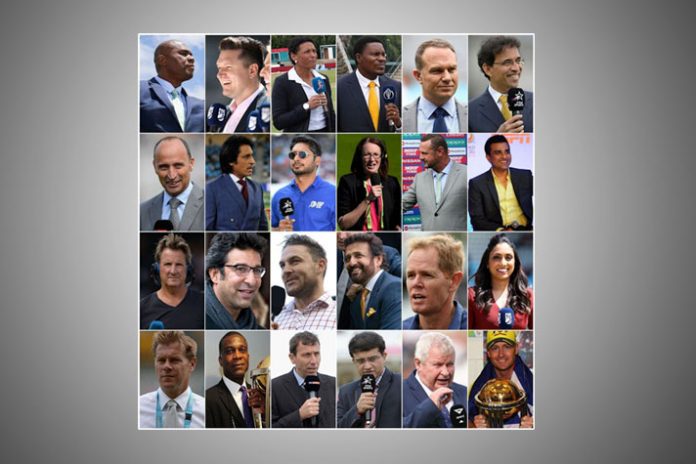 Indian trio of Sourav Ganguly, Sanjay Manjrekar and Harsha Bhogle figures in the 24-strong commentary panel for the ICC World Cup 2019. The broadcast of the May 3-July 14 competition in England and Wales will have many first for an ICC World Cup.

The International Cricket Council has announced a stellar line up of commentators for the ICC Men’s Cricket World Cup along with detailed broadcast plans that will bring more than a billion fans closer to the action and players than ever before.

ICC World Cup 2019: I am confident that I will have another good ICC…

ICC World Cup 2019: KL Rahul could be an option for India at No…

“The whole of England and Wales is buzzing with excitement in anticipation of the massive summer of cricket ahead. This edition of the ICC Men’s Cricket World Cup promises to be the most entertaining one yet and I cannot wait to be part of this event broadcast and witness history in the making, first hand,” said Nasser Hussain, former England and one of the most respected voices in a cricket commentary box.

Wasim Akram adds, “The upcoming Cricket World Cup has the same format as in 1992. It is the best format as teams get more chances and I reckon all teams will have an equal chance to qualify for the semi-finals. A World Cup comes every four years so players wait for it and do their best to give a memorable performance. I hope we are going to see some stiff competition with the edge of the seat thrillers, high skills and unmatched moments with the best players of the world on show.”

Viewers will be treated to state-of-the-art coverage which will include a minimum of 32 cameras at every game, including eight ultra-motion Hawk-Eye cameras, front and reverse view stump cameras and Spidercam.

For the first time at a Cricket World Cup, the broadcast will produce 360° replays, provided by Piero which allows multiple camera feeds to be stitched together to create stunning video that helps provide in-depth analysis of big moments in the game.

The coverage will also be complemented with a variety of analytical and visual enhancements including the use of Player Tracking. Broadcast tools such as Hawk-Eye will be supplemented by an in-depth cricket data analytics system to be provided by analytics app Cricviz.

The drone camera provided by Batcam will also provide stunning visuals of all venues across England and Wales. There will be a roving Buggy Cam as well, for a ground level view of proceedings.

Aarti Dabas, Head of Media Rights, Broadcast and Digital said: “I am excited to welcome such a talented team of broadcasters to ICC TV, they will bring to life the ICC Men’s Cricket World Cup for more than a billion fans around the world.

“Our focus for this event has been on bringing fans closer to cricket than ever before and our comprehensive host broadcast plan delivers this. Fans can enjoy unique insights from our commentators supplemented by unprecedented analytics focus making this the most engaging World Cup broadcast production to date.”

ICC TV has also made arrangements to produce a host of additional content off the field of play, to be distributed to its broadcast partners and other media rights partners via the ICC TV Content Delivery Service. This content will include daily player profiles, team features, match previews, venue features and other behind the scenes content, getting fans up close and personal with all the action around the ICC Cricket World Cup 2019.

The ICC has also released a video that briefly introduces the commentary panel.

The elite commentary panel is exited with opportunity. “Still the marquee event in our sport, I’ve got so many wonderful memories of World Cup cricket. 2015 was the pinnacle after a lot of hard work and I’m excited to be involved in a different capacity this time around – hopefully we’ll have plenty of drama!,” says Brendon McCullum.

“This is going to be a very special summer of cricket in England and Wales and possibly the most competitive ICC Men’s Cricket World Cup of all time. Hosts England have a great team but there are several realistic contenders and we are sure to see some amazing cricket along the way” says former Sri Lanka captain Kumara Sangakkara.

Melanie Jones says, “There is an intense sense of anticipation for this year’s ICC Men’s Cricket World Cup amongst players and fans alike. The round-robin format pitting each nation against each other, added with the strength of all ten teams, will no doubt result in the most competitive and closely fought World Cup to date. Add to that the chance of first time World Cup winner and it’s as exciting as the possibility of numerous upsets throughout.”

Ian Bishop: “I look forward to the next few weeks with great anticipation and expectation. It’s an honor to be part of the broadcast commentary team that will bring the stories, updates and analysis of the Cricket World Cup to you wherever you are. This edition promises to be even more exciting and innovative than ever and it is a great privilege to be a part of the team that brings it to you.”