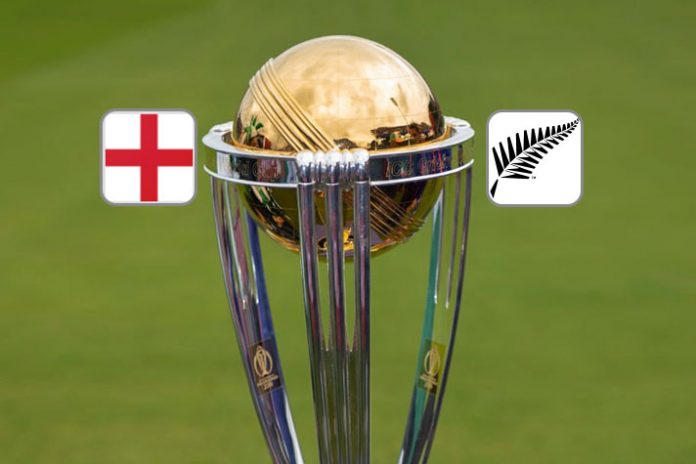 England and New Zealand have both had to ride out the storm to make this year’s ICC Men’s Cricket World Cup Final. The two nations through their ride to the title clash have assured that the ICC World Cup trophy this is set to have a new name etched on it.

It has been far from smooth sailing for either side, but in the end it is Kane Williamson and Eoin Morgan have led their teams to the top, and deservedly so. No-one can complain that the two best teams in the tournament are not in Sunday’s showpiece at Lord’s.

After contrasting group stages, they have peaked at the right time and are both one win away from a maiden world crown. England kicked things off six weeks ago at the Oval by downing South Africa in impressive style. Jofra Archer caught the eye with the ball while Jason Roy, Joe Root and Eoin Morgan all made half centuries with the bat.

But there was no doubting the star of the show, Ben Stokes setting the tournament alight with a stunning catch, 89 with the bat and two wickets with the ball.

Next up, England travelled to Trent Bridge to take on Pakistan but their bright start came unstuck in a dramatic 14-run defeat.

Joe Root and Jos Buttler both struck centuries for the hosts but a Mohammad Hafeez-inspired Pakistan held on to secure a famous victory.

England did not appear rattled however, a crunching 106-run win over Bangladesh in Cardiff settling the nerves.

Roy continued his super form by crashing 153 and England ended up posting a then tournament-high 386/6 that proved beyond the fighting Tigers.

Next up for England, their roadshow took them to the Hampshire Bowl to take on a fired-up West Indies.

Archer and Mark Wood bowled the Caribbean outfit out for 212 and Root struck his second ton of the tournament to see England home with eight wickets and almost 17 overs to spare.

The bad news for England were the injuries sustained by Roy and skipper Morgan that prevented either from batting.

But while Roy’s troublesome hamstring kept him on the sidelines, Morgan’s back spasm was soon a thing of the past as the captain produced the fireworks in their next game at Old Trafford.

The captain smashed an astonishing 17 sixes in his century and England broke their own highest total of the World Cup by posting 397/6 that proved way beyond Afghanistan.

The hosts appeared to be making serene progress through to the knockout stages, but in Leeds Sri Lanka sprung a serious surprise.

England’s chase of 233 at Headingley proved beyond them as Lasith Malinga rolled back the years to knock over the top order – still missing the injured Roy – and while Stokes did his best, they ended up 20 runs short.

That was their wake-up call, but England did not rouse from their slumber at Lord’s four days later as Australia gave them a beating at the home of cricket.

Mitchell Starc and Jason Behrendorff did the damage with the ball and England again fell short in a chase and suddenly the No.1 side in the world were in danger of being dumped out of their own party.

But with their backs to the wall, England came out swinging.

India were unbeaten and backed by a vociferous crowd at Edgbaston but with Roy back in tandem, Jonny Bairstow produced his best knock of the tournament with a century as England set 337/7.

Rohit Sharma produced another ton as was becoming customary at this World Cup, but India fell just short and England were still alive.

Pakistan, Bangladesh and Sri Lanka were all waiting to pounce if England gave them a sniff, and their last game was in Durham against New Zealand.

But when they needed to produce their best, they went back to their aggressive best.

Bairstow cracked another century as England won the toss and posted another 300-plus total, their sixth of the group stages.

The Black Caps fell short, but still went through the semi-finals courtesy of their net run rate.

They had their fast start to the competition to thank for their passage through the knockout rounds.

They smashed Sri Lanka by ten wickets in their tournament opener in Cardiff, then edged out Bangladesh at the Oval in the first day/night game of the competition.

Trent Bridge fell victim to the weather – a precursor for their rain-affected semi-final.

Williamson scored a century again as New Zealand posted 291/8 against the West Indies at Old Trafford.

That looked like being more than enough when Trent Boult and Lockie Ferguson ran through the top order but Carlos Brathwaite smashed a late century to get the Caribbean side close.

But his attempt at a match-winning six fell just a metre short, Boult claiming the catch on the rope to keep the Black Caps unbeaten and good value for the knockout rounds.

But no sooner did they look well-set than the wheels started to come off.

Babar Azam’s superb century helped Pakistan to a six-wicket win at Edgbaston and then at Lord’s, their trans-Tasman rivals Australia taught them a lesson in an 86-run win.

They were also beaten at Chester-le-Street by England and went into knockout rounds on a three-match losing streak.

But they turned the tables on India in an enthralling rain-affected two-day semi-final at Old Trafford.

On a tricky pitch, Williamson and Ross Taylor hit vital half centuries and when Matt Henry and Boult ran through the Indian top order, a surprise was very much on the cards.

MS Dhoni and Ravi Jadeja did their best to get India close but Martin Guptill’s sensational run out saw off Dhoni and the Black Caps finished off the job for an 18-run win.

Then at Edgbaston, England saved their best performance for last, beating Australia by eight wickets to hand their old rivals a first-ever World Cup semi-final defeat.

Archer and Chris Woakes did the damage in the first powerplay before Adil Rashid tied up the middle order and it was only Steve Smith’s 85 that got the defending champions to a total of 223.

And when Roy and Bairstow started like trains once again, victory was always going to be theirs, fitting perhaps that skipper Morgan hit the winning runs to take England to a first World Cup final in 27 years.