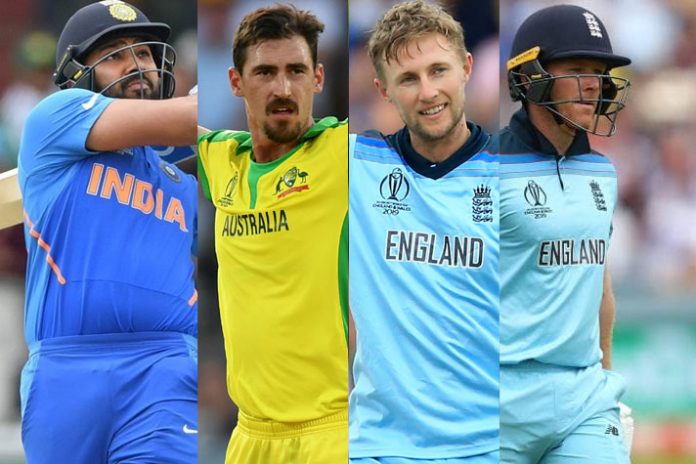 England found cricketing bliss by dint of divine intervention and Ben Stokes’ brilliance, cracking a code that proved indecipherable for 44 years as history sliced through New Zealand’s grasp in a World Cup final that will be remembered for ages. England’s golden generation of cricketers won the sport’s most prized silverware, their maiden, on boundary count after the epic final, and also the ensuing Super Over, ended in a tie.

In this edition of the Cricket World Cup, we saw some marvelous batting displays, bowling skills, thrilling catches, brilliant run-outs, and some jaw-dropping moments. Due to the incredible performances in the 46 days long tournament, some long-lasting records were broken, and the history books were re-written.

#1 Most centuries in a single edition – 5

Rohit Sharma became the 1st player to score five hundred in a single edition of Cricket World Cup which includes a dashing 140 against Pakistan at Old Trafford, he is also the highest runs scorer in World Cup 2019 as he had scored 648 runs. He broke the Kumar Sangakkara’s record of most numbers of centuries (4) in a single World Cup

Though Rohit had a poor IPL campaign before the World Cup, he was expected to bounce back on cricket’s biggest stage and he lived up the expectation.

Skipper Eoin Morgan broke the record of Chris Gayle for the most sixes (16) in a World Cup innings by smashing 17 massive sixes against the Afghanistan in the 24th match of 2019 World Cup. Though he was suffering a back injury, he was expected to sit out in that game. But the left handed batsman decided to play after taking painkillers.

Morgan finished with 148 runs in just 71 balls with a tremendous strike rate of 208.45, Besides, Morgan’s record of 17 sixes is also the most by a batsman in an ODI inning.

Mitchell Starc, the Australian speedster, claimed 27 wickets in just ten matches with a great strike rate of 20.5 and broke the record of Glenn McGrath’s  26 wickets in a single World Cup. However, in the previous edition (2015)  he felt short of breaking the record tally as  Starc claimed 22 wickets in just eight games with a decent strike rate of 20.5. Even though Starc took only one wicket in Australia’s opening game against Afghanistan, he came back strongly in the next match by claiming five wickets against West Indies.

England’s Test skipper Joe Root overtook the record of multiple World Cup winner Ricky Ponting for taking 11 catches by a non-wicket-keeper in a single World Cup. Joe Root now holds the record for the most number of catches in a single edition as he had taken 13 catches in 11 matches. Since none of the league stage matches of England washed out, as a result Joe Root Utilized the opportunity.