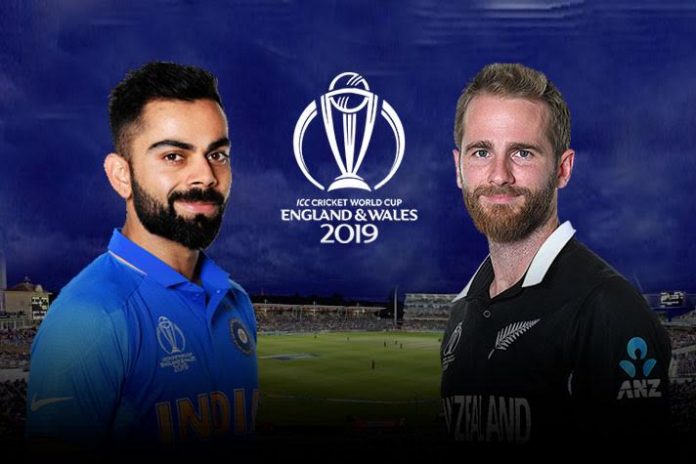 As India and New Zealand gear up for the first semi-final of the ICC World Cup 2019, the 11-year-old rivalry of Virat Kohli and Kane Williamson is being discussed as much as the threat from Japrit Bumrah and Trent Boult lethal deliveries.

It took until the final overs of the final group game but eventually confirmation came through that it would be India and New Zealand facing off in the first World Cup semi-final.

This will be the very first meeting between the sides in a knockout game at the ICC Men’s Cricket World Cup. Even though they were lined up to meet for their round robin match on  May 25 at the Oval, London, the match was washed out. So, Indian and New Zealand will be facing each other for the first time in the ICC World Cup 2019.

The game features two of the world’s leading batsmen captaining their sides in Kohli and Williamson, as well as a pair of strike bowlers at the top of their game in Bumrah and  Boult.

So as the teams bid for a place in Sunday’s final at Lord’s, the International Cricket Council has shared some of the key talking points:

For sheer consistency, there are few who can rival the two skippers, Virat Kohli and Kane Williamson. The pair have been going up against one another for more than a decade, going all the way back to their team at Under-19 level.

Back in 2008, they captained their respective sides at the Under-19 World Cup, also at the semi-final stage. That day it was India who emerged on top, with Kohli – then more of an all-rounder – dismissing Williamson who was opening the batting. They have since gone onto become two of the most prolific run-getters in international cricket, and the backbone of their batting line-ups, combining for 99 international centuries. Could the semi-final be the occasion to make it to a hundred hundreds?

So far neither has quite produced at their best in a World Cup semi-final or final, Kohli’s 35 in 2011 final the best either has managed across three combined semi-finals and two finals.

However, interestingly both admitted before the game that it is not Kohli, but teammate Rohit Sharma, who is currently the world’s leading ODI batsmen. The hope for New Zealand is that the combination of Sharma and Kohli does not outweigh Williamson’s contribution.

In each of their last two matches – victories over Bangladesh and Sri Lanka – India have played five specialist bowlers who have all bowled their ten overs. With a trio of wicket-keepers in the batting line-up, Kohli has been more reliant on his front-line bowlers to complete their full complement. This combination has been possible because of Hardik Pandya’s development as a bowler, now becoming a very reliable option with his seam attack.

Ravindra Jadeja’s all-round abilities offer an alternative solution, were India to choose to bring in an extra all-rounder as a sixth bowling option. The left-arm spinner did a good job in the win over Sri Lanka as part of a five-man attack, but his batting means that he could theoretically slot in at No.7 if India wanted to keep a sixth bowling option in reserve.

Batting coach Sanjay Bangar refused to commit one way or the other after the win over Sri Lanka last weekend to round out the group stage, but it is a choice which will have a large bearing on how the semi-final plays out.

The chase is on

One quick peak at the stats and it appears an obvious decision for the captain that wins the toss on Tuesday. Five games of this World Cup have taken place at Old Trafford and five times the team that have batted first have gone on to win. But first glances can often be deceiving, and dig a little deeper and it is clear that the Manchester surface is certainly true. Chasing teams have come almighty close in what have been some high-scoring games in England’s northwest.

Carlos Brathwaite was just a metre short of smashing the match-winning six that would have got the West Indies over the line in reply against the Black Caps. And Alex Carey and David Warner just last weekend ensured Australia came within sight of South Africa’s impressive total of 325.

Should conditions look like they might offer something to the bowlers early on, neither captain should ignore the option of bowling first, safe in the knowledge that these Old Trafford decks have stood the test of time.

Battle of the Bs

Jasprit Bumrah and Trent Boult are two of the premier white-ball bowlers in world cricket. Both carry the chief attacking threat for their side with ball in hand and both have the versatility required to influence proceedings in all three powerplays. Between them they have taken 32 wickets at this World Cup, Bumrah has 17 and Boult has 15, but just as impressive is how economical they are.

Both are going at under five an over and sit in the top ten for this World Cup in terms of economy rate. But despite their versatility, they are masters of slightly different arts. Boult has made his name as a new-ball bowler, indeed in between the last two World Cups no one took more wickets in the first powerplay than the Kiwi left-armer.

While Bumrah is the death specialist, sauntering to the crease and yet then producing devastating yorkers that former Kiwi skipper Daniel Vettori described as ‘nigh-on unplayable’ earlier this week. Lockie Ferguson is back fit for New Zealand and Mohammed Shami had some real joy against the Black Caps earlier this year, but make no mistake about it – Boult v Bumrah is the marquee match-up.

Four years ago Martin Guptill was the top run-scorer at the World Cup, firing the Black Caps to within touching distance of their first-ever title. But in 2019, the opener has struggled to find his best form after an impressive half-century in their tournament opener. Alongside him at the top of the order Colin Munro and then Henry Nicholls are still waiting for big knocks while Ross Taylor is averaging 37 but has only two half-centuries to his name so far.

Williamson’s brilliance is pretty well-established at this point, but if the Black Caps are to post a serious score and pass 300 for the first time this World Cup – then the skipper is going to need some help.