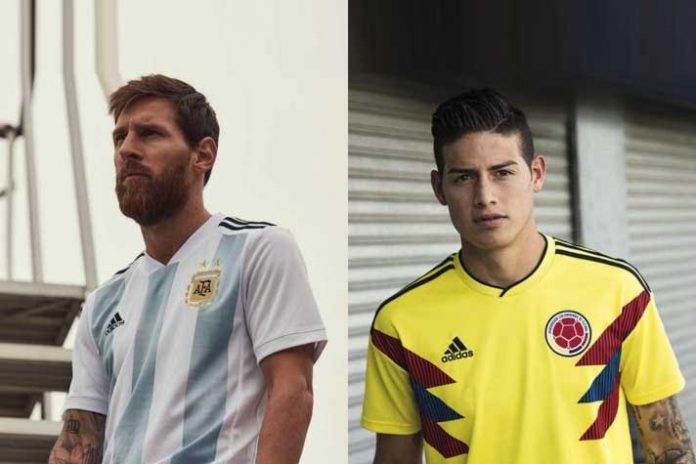 The FIFA World Cup 2018 Group Stage games in Russia were wrapped up yesterday (Thursday). As the “unfortunate” ones fly home, the brands associated with them are also deprived of precious presence in one of sports world’s biggest marketing platforms.

The 16 teams heading for the next round, with the first knockout tie between France and Argentina tomorrow (Saturday) at 8:00 pm IST, are now gearing up for the fiercest litmus test for the final shot on the coveted golden FIFA trophy.

It’s not just the players and the team management that are heaving a sigh of relief, securing a berth in the round of 16. Their sponsors are also sitting pretty with the assurance of having their brand presence and visibility on the field for the next stage.

Adidas, as was the case on Day One, remains the strongest among the team sponsor brands in the knockout stage too. As many as 12 teams had started their World Cup campaign wearing Adidas kits. The German sportswear brand was then the most visible brand on-field among other a kit/apparel partners during the length of time between the kick-off and the last game of the group stage.

Adidas continues to remain the top brand in terms of on-field visibility as half of the 16 teams that qualified for the round of 16 will have the German apparel brand’s logo on their kits. Other Adidas beneficiaries that have failed to make a cut are Morocco, Egypt, Columbia and Germany.

Still, all is not well with the German sportswear giant. Germany’s inglorious ouster from the World Cup is something not easily digestible to Adidas, especially when the two have signed the third most expensive kit sponsorship deal, worth $32 million, among the 32 other teams. France ($54 Million) and England ($46 Million) have the most expensive deals ahead of Germans, both with Nike.

The FIFA World Cup was the biggest occasion for the brand to gain from its on-field presence.  A mere three matches or 270 minutes of action in the most precious and highly valued event is far below Adidas’s assumption for ROI on their sponsorship commitment to the 2014 World Cup champions.

Next in the list is American sportswear brand Nike. Among the 10 World Cup 2018 teams it sponsored, five– Portugal, France, Brazil, Croatia and England – have secured a berth in the round of 16. Poland, Saudi Arabia, Australia, South Korea and Nigeria have failed to make the cut. However, Nike is not that unhappy about its association with Nigerian Football Federation. It had sold a whopping 3 million replicas of Nigeria’s home and away kit in a mere 15 minutes after its launch.

However, Nike in term of teams elimination ends up a bigger loser than Adidas. While Adidas has seen 33% of its 12 sponsored teams marching out of the World Cup, for Nike the loss is 50%.

Four teams – Serbia, Switzerland, Senegal and Uruguay – started their campaign donning Puma Kits. The brand, also German, has secured the next round visibility of its large feline logo on two of them, namely, Uruguay and Switzerland. Danish sportswear brand Hummel got lucky as the national team of their country they are sponsoring have also secured a place in the knockout round after a plausible start to their campaign.

New Balance is among those unlucky brands to be eliminated from the World Cup. The US sportswear brand-sponsored Panama and Costa Rica are both out of the fray of the 2018 title.

English brand Umbro (Peru), Icelandic brand Errea (Iceland) and a lesser known German brand Uhlsport (Tunisia) were among the four kit sponsors, along with Hummel, with their branding on just one nation’s kit each. Peru, Iceland and Tunisia have failed to secure a berth in the knockout phase.

Even though Iceland failed to qualify, their heroics for being the smallest country that defied all the oddities to make a World Cup debut will surely garner mileage for more lucrative sponsorship deals in future.

Also Read: FIFA World Cup 2018: Adidas to be the most visible brand during games