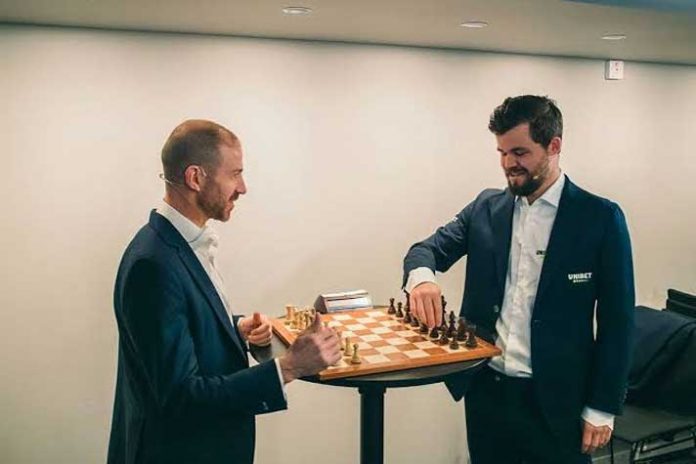 Unibet has signed a global sponsorship agreement with the world’s chess champion, Magnus Carlsen, making Carlsen the global ambassador of Unibet in 2020 and 2021. Unibet, Kindred Group’s global sports betting brand, enters a two-year commercial sponsorship with the chess World Champion Magnus Carlsen, strengthening the brands’ position as well as enlisting themselves as the main sponsor of the world champion.

“I think it’s a good partnership because we share a lot of common values and interests such as an analytical approach to games,” said Carlsen. “I think it’s going to be very exciting moving forward, seeing as Unibet is a global brand. Obviously, we share other interests as well.”

Also Read: Anand draws with Dubov; Carlsen back in reckoning

“Unibet also have a highly professional and at the same time creative and playful approach to precise execution, which is something I can associate with. I find it exciting that such a big and global brand now aims to take greater ownership of international chess,” continues Magnus Carlsen.

Chief commercial officer of Kindred Group Rhodri Darch spoke on behalf of Unibet. He mentioned the NBA, football, poker, and chess as common interests, and that in 2014 Unibet was the first international betting operator to offer live odds on chess.

“We’re delighted,” said Darch. “Magnus is a huge star, the reigning world number-one since 2010. I joined the company in 2009 and we were discussing around chess as far back as 2010. We’ve seen phenomenal growth in chess and we’ve seen our own interest growing in chess.”

The announcement has been accompanied by an epic commercial featuring Carlsen, which seems to have been at least partly inspired by Rocky Balboa.

Luck is no coincidence♟

Darch mentioned, “Magnus is also a perfect embodiment of the Unibet brand positioning. We talk about ‘luck is no coincidence,’ that’s really about making great decisions using data. We encourage our players to use data statistics and really think analytically and make sound choices, either about how they choose to use the tools we offer to play responsibly or how they find an edge, how they find the very best opportunity.”

Anand falters while Carlsen is supreme

The deal is not without controversy, and Carlsen referred to that during the press conference: “For me, this is something that’s also become a more natural fit after what happened last summer and us sort of being on the same side of a major discussion.”

Now a personal, global deal has been added. Carlsen will be promoting Unibet wherever he plays, except for his home country: “I will not promote Unibet with branding in Norway; this is a global partnership and we adhere to Norwegian law,” he said.

With all the controversy in mind, one reporter asked Carlsen at the press conference what kind of reactions he expected from his new sponsorship deal.

“I don’t think I am the person who should speculate on possible reactions; you are the media and that is your job!” was the world champion’s initial reply.

Asked what reactions he was hoping for, he said: “What I’m hoping for is for people to share the excitement that we feel about this cooperation.”

Barcelona vs Real Madrid LIVE streaming: Watch the ElClasico LIVE on MTV and VootSelect on Oct 24 in India